Tolkien, the late-developer, with reference to photographs (stimulated by re-reading Tolkien at Exeter College, by John Garth; 2014)

I have just re-read Tolkien at Exeter College: how an Oxford undergraduate created Middle Earth by John Garth - a 64 page illustrated pamphlet, published by Exeter College, Oxford in 2014. It is enjoyable and well worth reading; since it puts a microscope onto this important and transitional period of Tolkien's life (complementing the same author's Tolkien and the Great War).


What strikes me is that Tolkien was very much of a late developer. This is obvious from his undergraduate career; he started at Oxford aged 19, and the impression from his first couple of years of college life is of an immature, almost compulsively-sociable young man; who joined a large number of dining, conversation and sports clubs; worked very little; engaged in rowdy, destructive, even criminal 'japes'; and spent a lot more money on entertainment, eating and drinking than he could afford - significantly more than the other young men with Exhibitions and Scholarships spent.

It was not until he changed his course from Classics to English, that Tolkien found his vocation, and began to focus his efforts on learning and working. Furthermore, he focused his friendships away from casual acquaintance with dozens, down to fewer and closer relationships; especially with the TCBS members from his schooldays (GB Smith at Oxford; RC Gilson and C Wiseman at Cambridge), and the re-awakening engagement with his future wife Edith.


But I would like to discuss photographs. In Humphrey Carpenter's 1977 official biography there is indeed a whole chapter called Photographs Observed; but HC does not mention what strikes me just now.

Which is that in all his early photography, from his teenage right through to the early twenties, Tolkien had a singularly characterless, expressionless face - at least as revealed in photographs. There seems no disernable trace of his genius, nor even of an interesting person!

The narrowed eyes stare into the distance - but in a way that seems vacuous rather than visionary! 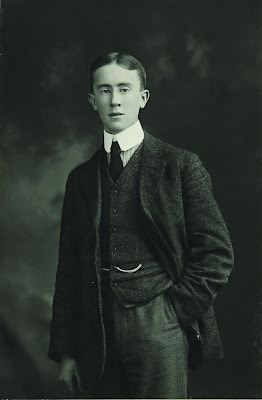 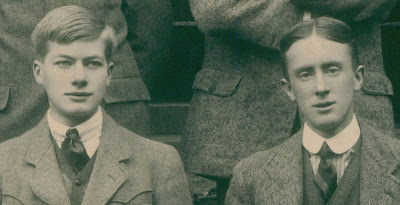 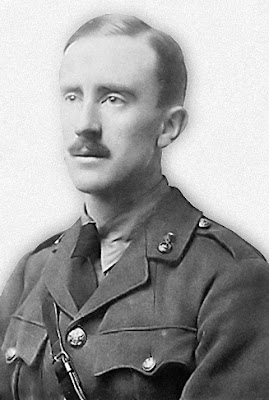 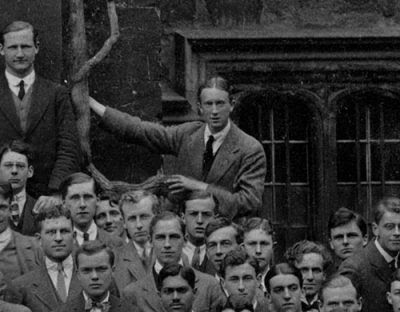 It might be objected that these are just photographs, and that nobody looks very lively in these old posed pictures. Yet the fact is that most of Tolkien's colleagues look much more distinctive, interesting, characterful than he did!

Of course these were a talented bunch of young men, and many of them were killed in the war (fully half of his matriculating class; overall about 20 percent of the entire college) before they could demonstrate that they might be even greater geniuses than Tolkien...

For example, Colin Cullis, in the second picture, was Tolkien's room mate and a member of most of his clubs, and held a higher academic award than Tolkien (a Scholarship, to Tolkien's Exhibition). He has a poetic and sensitive-looking face; with intent eyes. But Cullis was laid low with a serious heart condition, missed the war from ill heath and died in the 'Spanish Flu' of 1919.


Nonetheless, having made all these caveats I am in no doubt that Tolkien was a singularly blank-looking young man, especially when contrasted with the more familiar characterful and appealling old man he became. This fits with his extravert, sensation-seeking, drifting way of life.

Presumably the transition to an internally-driven genius began to evolve in his young adult life or later; perhaps related to getting married, having children, taking responsible jobs...

There is, however, a picture taken in his later 20s when a Reader or Professor at Leeds, where he still seems only 'partially-formed'! And even by the time of this formal picture of 'the 1930s' (aged about forty), although Tolkien has developed a much more intent and eagle-eyed expression, yet he still seems a bit blank and 'vacant'! 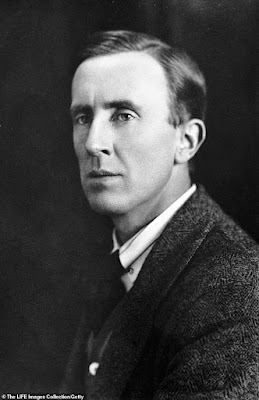 It was not until Tolkien's late forties when we start to see that 'twinkle' in the eye that I regard as characteristic: 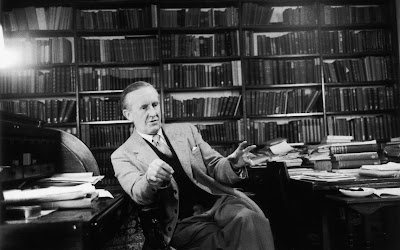 What do I conclude? Simply that Tolkien's facial appearance broadly matches-up-with and tracks the strengthening and deepening of his literary powers; and this came after middle age. Surely this is what we would expect, after all?

It is perhaps reasonable to conclude (albeit rather lamely!) that these and other photographs confirm that Tolkien probably could not have written his greatest work, until the later-life years when - in fact - he did write his greatest work! 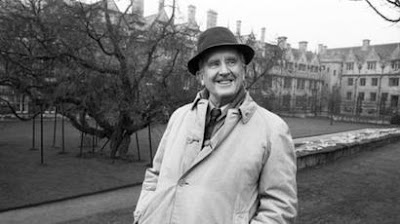 Note: The photos above are merely illustrative ones that I could find on the interweb. My case is argued on the basis of scores of photos I have in various books.

"many of them were killed in the war (fully half of his matriculating class ...)": was this a typical proportion for young army officers, or was Exeter unusual?

@d - I don't know - it would depend on the baseline. These were men 'going-up' just before the war broke-out (1911). Usually the proportion is calculated with a baseline of all the college graduates who enlisted - and I think Exeter was about typical at circa 20%. As you know, the most junior officers had by far the highest mortality rate of any ranks due to leading attacks and patrols (leading from the front). But I have noticed that the proportion of seriously injured in wars was usually about double that of those who were killed (maybe that will be less through the twentieth century as surgical expertise increased, antibiotics etc) - so we should remember them. You'll know that the 1914-18 roll of honour at Oxbridge colleges usually has more than 200 names at a time when the annual intake was (I think) around a hundred per year (but I'm not sure of this, and colleges varied in size, obviously).

This is very interesting. I wonder to what extent JRRT was aware of this change within himself and what bearing it had on how he felt about the highs and lows of his own life.

@John - I think so - I never thought of it until a couple of days ago; but when I had noticed it, it seemed obvious.

I wonder how much photographic conventions are a part of this? E.g., he seems more 'characterful' in the group photos than in the earlier or later portrait photos. And his contemporary earliest writings, such as 'The Voyage of Éarendel the Evening Star', and the evidence of his early club talks, are 'characterful' and even already characteristic, too.

I agree that some early writing is good, but it's not as good as the later - obviously. My point is that he did not reach his full powers until middle age, and perhaps we can see evidence of those powers emerging - in his eyes.

Or is it this: that in the earlier pictures he "assumes" the appearance he supposed was suitable to the occasion of a portrait -- but later, we see the middle-aged fellow who'd become an Inklings performer? Surely there was an element of performance in the Inklings meetings -- ? If so, Tolkien may well there have come into his own as a bit of a "character."