How many Mars Bar-adjusted pounds does the Lord of the Rings cost, then and now? 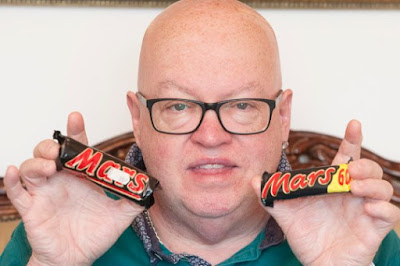 A hobbit holding some Mars Bars

All three LotR volumes cost 3 guineas = about 3.2 pounds. Nowadays, the three volume paperback costs about 25 pounds from amazon.co.uk including delivery. So, the raw cost of buying a new three volume LotR has increased from the 1950s to now by about Eight-fold (25/3.2 = 7.8).

Therefore, to adjust for UK inflation since the 1950s to now, we need to multiply current prices by twenty-nine.


(Why Mars Bars? Well, the Mars Bar is 'officially' (i.e. according to an article in the The Financial Times) a Standard; and a (sort-of) acknowledged unit of inflation-adjusted cost. This means that we can standardise the 'real value' of money c. 1955 by correcting for the inflation of Mars Bar prices - that is by multiplying current price by twenty-nine*. )


Therefore, the equivalent (MB-adjusted) cost of LotR at the time it was published was about 93 pounds (approx = 29 X 3.2 pounds).

Of course, for that high price, one was getting a beautifully sewn hard-backed book to last a lifetime, instead of a glued paperback that will probably fall to pieces in about a decade.

The point is that 93 pounds would nowadays be A Lot to pay to buy a copy of a novel, and way beyond what people (especially teens) would normally pay for a book. Therefore it is not at all surprising that the LotR took quite a while to become well known and widely read in the UK.


The first UK paperback was an omnibus edition of all three books - which was not published until 1968. However, this version was minus the appendices (except for an excerpt about Aragorn and Arwen). It sold for 30 Shillings - or 1.5 pounds.

By 1970 the Mars Bars had apparently increased in price to 6d - so we can use a twentyfour-fold inflation adjuster; then we get an MB-adjusted price of 36 pounds for the 1968 omnibus paperback edition.


At the time I first read LotR that single-volume-paperback was the only 'affordable' option for a teen - and very steep even so.

Because the paperback was incomplete, I wanted to buy The Return of the King, in order to get the appendices; and this was only available in hardback. But by 1970 the hardback had nearly doubled in price (to 1.95 pounds) since it was published.


This shows what poor value was the UK paperback in the early 1970s, and how the restrictive practices of bookselling had - by the 1970s - made UK books relatively more expensive in 1968 than they were in the 1950s. Although I recall that, in addition, Unwin's Tolkien books were noticeably more expensive than most.

From all this it is easy to see just why it was in the United States that Tolkien first became popular, with the UK lagging far behind. Books have always been cheaper in the US than the UK - despite usually being better made; perhaps due to more competition and to the larger market?

And furthermore while the UK had to wait until 1968 for an incomplete paperback; the US had a (pirate) Ace paperback of the complete book from 1965, selling at 2.25 dollars for all three volumes (75 cents per volume)  - which would (with about 2.5 dollars to the pound, at that time) have been equivalent to less than 1 Pound, half the price of the UK paperback omnibus version.

PS: I got the idea for this from Tom Shippey, who calculated the relative cost of LotR - then and now - but (characteristically) using the price of a pint of beer as his adjustor. I felt this could be improved (economically, albeit less amusingly) using the FT-approved Mars Bar Standard.

Perhaps you were reading something that Shippey published, but I can say that he *did* give us beer-normalized prices for LotR in his talk last summer at Tolkien 2019 in Birmingham. Fun talk!