The Rings of Power - failure for Sauron, success for Morgoth

Sauron decided to make nineteen rings of power for elves, dwarves and men - and the One Ring to control them. So, did his plan work?

Overall not. The nine rings for men were the best success; since they produced the Ringwraiths, who were powerful and completely loyal to their master. But the dwarves were resistant to being enslaved - so Sauron got those back which had not been destroyed by dragon fire. And the elven rings were never tainted by the touch of Sauron, and were only used when he did not have the One Ring.

Even when Sauron had possession of the One Ring - and maximally enhanced by it; nonetheless, his armies were defeated by the Last Alliance of elves and Men - and Sauron himself was slain (in his bodily form) by Gil-galad and Elendil.

And then, after Sauron had lost possession of the One Ring; he was destroyed spiritually by its destruction.

If we presume that the purpose of the rings of power was to gain power for Sauron - because power was Sauron's primary goal; then they did not work; and did him more harm than good in the end.

The corruption of the Ringwraiths has always been mentioned. But although not enslaved by their rings, the dwarves were corrupted. The rings enhanced their core sin - which was greed for material things, for wealth. The dwarf rings were desired by (some) dwarves because they were supposed to amplify wealth, that was the flaw of greed which the rings then amplified.

And even the elf rings amplified the elves major sin - which was the desire to slow down time and change: to make the mortal lands of middle earth more like the undying lands. This increased the elvish tendency to inertia, regret; towards passive self-absorption.

Plus the One Ring, after Sauron had lost it. This caused considerable and widespread corruption. Most obviously by turning Saruman (the greatest wizard) to the side of evil. Also the ill effects on Isildur, Denethor and Boromir (among the greatest of Men). Then there was the chronic temptation of Galadriel - the greatest High Elf of the age (eventually overcome).

At the smaller scale there were historically significant effects on the proto-hobbits Deagol and Smeagol - and the pain and corruption done to Frodo.

Indeed, only Bilbo and Sam seem to have had net-benefit from the One Ring.

So the rings of power failed to achieve dominating power for their maker Sauron; but achieved an increase in the amount of evil in the world which benefitted Sauron's master - Morgoth. They made a considerable contribution to the agenda of evil.

Acknowledgment: The above ideas were developed in conversation with my son, Billy.

Sam's character was transformed by encountering the High Elves of Woody End, much as was Frodo's

I tend to think of the character of Sam Gamgee as being stable throughout the Lord of the Rings; but that is not really true.
When the quest begins, Sam has been instructed by Gandalf to accompany Frodo - but he agree mainly because he wants to meet with elves. In the early phase of the quest - before setting-out and for the first day of the journey; Sam is not explicitly and obviously devoted to Frodo, in the complete and self-sacrificing way he was later. He seems more like a normal, faithful domestic servant.

But the encounter with High Elves in Woody End seems to have had a transformative effect on Sam - much as it did on Frodo; after Gildor named him 'Elf Friend'.

He looked at Sam Gamgee, and discovered that Sam was watching him. ‘Well, Sam!’ he said. ‘What about it? I am leaving the Shire as soon as ever I can - in fact I have made up my mind now not even to wait a day at Crickhollow, if it can be helped.’

‘You still mean to come with me?’

‘I do.’ ‘It is going to be very dangerous, Sam. ‘It is already dangerous. Most likely neither of us will come back.’

‘If you don’t come back, sir, then I shan’t, that’s certain,’ said Sam. "Don’t you leave him!" they said to me. "Leave him!" I said. "I never mean to. I am going with him, if he climbs to the Moon, and if any of those Black Rulers try to stop him, they’ll have Sam Gamgee to reckon with", I said. They laughed.’

‘Who are 'they', and what are you talking about?’

‘The Elves, sir. We had some talk last night; and they seemed to know you were going away, so I didn’t see the use of denying it. Wonderful folk, Elves, sir! Wonderful!’

‘They are,’ said Frodo. ‘Do you like them still, now you have had a closer view?’

‘They seem a bit above my likes and dislikes, so to speak,’ answered Sam slowly. ‘It don’t seem to matter what I think about them. They are quite different from what I expected - so old and young, and so gay and sad, as it were.’

Frodo looked at Sam rather startled, half expecting to see some outward sign of the odd change that seemed to have come over him. It did not sound like the voice of the old Sam Gamgee that he thought he knew. But it looked like the old Sam Gamgee sitting there, except that his face was unusually thoughtful.

‘Do you feel any need to leave the Shire now - now that your wish to see them has come true already?’ he asked.

‘Yes, sir. I don’t know how to say it, but after last night I feel different. I seem to see ahead, in a kind of way. I know we are going to take a very long road, into darkness; but I know I can’t turn back. It isn’t to see Elves now, nor dragons, nor mountains, that I want - I don’t rightly know what I want: but I have something to do before the end, and it lies ahead, not in the Shire. I must see it through, sir, if you understand me.’

‘I don’t altogether. But I understand that Gandalf chose me a good companion. I am content. We will go together.’

So; Sam is not named an Elf Friend, but he is changed by the experience of conversing with the Elves; perhaps when the Elves said "Don't you leave him!" - this was partly an enhancement of what he already felt, partly a clarification; and perhaps also the injunction was also taken as an order from those of greater wisdom and authority.

At any rate, from then onwards - and permanently, Sam put Frodo first.

Review of The Nature of Middle Earth by JRR Tolkien (2021; edited by Carl F Hostetter) 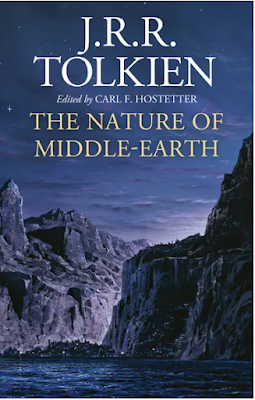 The Nature of Middle Earth by JRR Tolkien; edited by Carl F Hostetter. HarperCollins: London, 2021.
This book is significant as being the first collection of mostly-unpublished JRR Tolkien writings to emerge since the death of his son Christopher; being edited by Carl Hostetter. It is a book that serious Tolkien readers will want to own and use; because it is something like a cross between The History of Middle Earth Volume XII and an addition to Unfinished Tales.
Therefore, those who regard HoME and/ or UT as important, will not want to miss this one: there are many things here which I regard of permanent value; and I am very grateful to know them.
These are too many to list. Perhaps the essay Osanwe-kenta may take pride of place (I had already read this, but it was previously only available in a small circulation magazine). This is a detailed consideration (relevant to both Middle earth and our own world) of the 'communication of thought' by what might be termed telepathy, including the implications for free will. This was of extraordinary depth and interest to me.
Another section is given the title of Description of Characters, and is Tolkien's commentary on Pauline Baynes's illustrated map of Middle Earth from 1970. For example, Tolkien regarded the back-view of Boromir as an almost perfect representation of his imagination; while Sam and Gimli were 'good enough'. On the other hand he was critical of several (most!) others including Gandalf, Legolas, Aragorn, Shelob and the Black Riders; and in making these criticisms he gives further detailed accounts of how he saw them.
The bulk of the book is about elves; including a great deal about their different types (also why they ended up different) and very large scale considerations of the justice and wisdom of the Valar in their dealings with elves. All this was absolutely gripping, and operates at a very deep spiritual level.
The book does, however, have a significant flaw in that it begins badly - i.e. boringly. There are 166 pages under the section title of Time and Ageing - with repeated developing drafts of Tolkien's consideration of the time-lines, time-experiences (relative between the undying lands and Middle earth, and between races), movements of elves; and a lot about the elves rates of growth and reproduction. These are often presented in terms of tables of figures, and lists.
There was a great deal to interest me among these 166 pages; but there is no denying that there is a great deal of repetition and minutiae. There is considerable relevance - even here - for those of us fascinated by Tolkien's mind and creative processes. But I think it was - I believe - an error to begin the book with this material; because some readers who open and start reading at page one, will probably get no further. I would have placed this material in the middle of the volume; and probably relegated some of the repetition and tables to an optional appendix.
The last section of the book, entitled The world, its lands, and their inhabitants - may have the broadest appeal to those whose interest is focused on Lord of the Rings. It consists of 100 pages of extra 'snippets' about all kinds of things. I was particularly pleased to learn more about Numenor (everyday life, reproductive life, ageing etc).
In general; this volume is (I think) the first to provide abundant new authorial material on what might be termed demographic, social and organizational aspects of Middle Earth (and the undying lands) - which are often stated to be neglected by Tolkien because they are omitted from Lord of the Rings. The Nature of Middle Earth proves that Tolkien had indeed considered such matters, often in considerable detail - albeit often after the publication of LotR.
Overall, this is a book aimed at Tolkien aficionados such as myself; but for us it takes its place alongside John D Rateliff's two volume History of The Hobbit - valuably supplementary to the many earlier (and uniquely, filially, authoritative) volumes edited by Christopher Tolkien.
Posted by Bruce Charlton at 11:05 2 comments: