Two of my favourite scenes from the movie version of Lord of the Rings involve the actor Noel Appleby (credited as Everard Proudfoot) playing an un-named hobbit whose archetypal character frames the action of the film between the arrival of Gandalf and the return of the four hero hobbits after the quest.

This is really excellent directing and acting; because these little scenes carry a great deal of weight.

Due to the story cuts involved in making the screenplay - these brief visual statements were needed to illustrate what the average hobbit thought about wizards, magic and the like at the beginning.

And, at the end, Mr Appleby had to show - quickly and effectively - that life in The Shire had not been at all affected by the War of the Ring. (In the movie version, not the book). And that Frodo, Pippin, Merry and Sam were regarded as just a bunch of prodigals returned; whose clothes and manners all-too-obviously showed our Everyman hobbit that the 'heroes' had developed much too high an opinion of themselves.

As Tolkien himself said - and embodied in the text - most hobbits would be pretty uninteresting to live among. Sam was the closest of the four adventurers to the average type; but his character was raised and ennobled by his fascination with elves and wonders - and his aspiration for 'higher things'.

Take that away - and you get Everard of the Proudfoots... or should I say Proud-feet?

Posted by Bruce Charlton at 19:26 No comments: 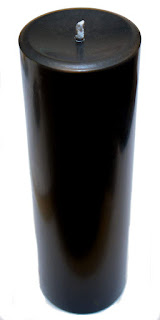 A simple household candle... or is it?

Few have yet noticed the sinister resurgence of those who revere the name of Saruman.

I became aware of the problem some years ago when a shiny black pillar was erected near to my place of work, and I realised it was a coded reference (a 'dog whistle' as it were) to the Tower of Orthanc. All easily deniable, of course - indeed the pillar was topped by a signpost - yet the dark sympathies were obvious to the sensitive eye, trained by years of being the unacknowledged victim of microaggressions.

We all know that Saruman was the Worst Person Ever; but to hear these cultists, he was a man 'ahead of his time', with 'some good ideas'. 'At least he was aiming in the right direction', they will say - pleading that the man was 'misunderstood'.

That, at least, is as far as they will go in public; but in private it's another matter. There is, indeed a covert Neo-Orthanc party; meeting in shady corners of the internet and seedy corners of our universities. Here, in what they imagine to be 'private', some of the more extremist (or perhaps just more honest?) will exchange their real feelings about their hero.

For these fanatics, Saruman's only 'fault' was that he happened to be on the losing side; and was defeated by an unsavoury colation of tree giants and reactionaries. But so far as his visionary politics goes? Well, that they believe was wholly A Good Thing.

They will cite his advanced ideas on destroying the 'Nordic' races, such as the Rider of Rohan, and replacing them with his mixed Master Race of the Urak Hai - who blended (according to these misguided but dangerous cultists) 'the best' qualities of Dunlander Men and Orcs. Hence the symbolism of the severed White Hand and the cloak of 'many colours'...


If you have been unaware of all this, then I am sorry to disturb your peace of mind; but it is necessary to know what is going-on if we are to resist, and hopefully, defeat it.

Once you realise, you will see the signs everywhere, crudely disguised - not only (albeit most explicitly) white-ish hands in various positions and poses; but black shiny long things, things with shifting colours, endless visual references to their hero's hat (pointy triangular things), or his soothing seductive voice (soothing, seductive things)...


The reason I raise this is that me and some mates have started to organise riots and beatings of people we suppose to be in some way connected with the Neo-Orthanc tendency. We have a cool name - Antisar - and there seems to be no shortage of money to pay for our costumes, bike lock batons and coach rides to city centres.

Some foreign guy with a funny accent always foots the bill and is very encouraging - although the single red eye in the centre of his head is disconcerting until you get used to it.

Don't worry about getting into trouble: we all wear masks or headscarves (I told you it was cool!) and nobody ever makes us take them off.

Nor will you be ignored; the mass media are always there before we are, and they are always on our side and can relied upon to conceal any (rare) instances when brothers or sisters get over-enthusiastic or indiscriminate in a good cause.


Remember: when it comes to Neo-Orthancs, they are everywhere and they are evil; and anyone who hates them is therefore, by definition, Good.

Posted by Bruce Charlton at 14:18 No comments:

Fantasy is a literary genre

From about fortyfive years of experience, since I read Lord of the Rings (LotR), I agree with Tolkien's opinion (offered in On Fairy Stories) that fantasy is essentially a literary form.

After I read LotR, I tried to repeat or extend the experience by seeking in other art forms. At that time, there was not much material (that I could access, anyway) but I eagerly looked at such posters and pictures I could discover - including those by Tolkien himself.

But I found almost all of them unsatisfactory; and of those I did like (such as the work of Pauline Baynes) I would not say that they added to my experience of the books, or increased its depth - it was more a matter of taking the edge off my hunger. Tolkien's own pictures are often very good, but not in the sense of amplifying what he had done in the books. None of them looked like the real places (or people).

I have always found the musical side unsatisfactory too. My search began with medieval and folk music; and while I did develop a taste for these forms, I could never find anything which I felt fitted into the world of LotR - nothing that could have been perfomed in that world. Since then this has not changed. I never find that any musical setting genuinely fits the world of the book. Although I really enjoy Howard Shore's music from the movies (and own CDs of both the soundtrack and orchestral suite) - this is quite separate from my experience of the books. Certainly I cannot imagine Shore's music actually being sung or played in Middle Earth. The same applies to the way that songs are performed in audiobooks, and audio dramatisations adapting the novels; they may be good, but never 'fit'.

As for the matter of visual dramatic adaptation itself - again it is different. When Middle Earth is visually depicted in a movie or drama, the primary and specific fantasy element is closed-off rather than deepened. The LotR movies are about as good as movies can be - but there is a great gulf between fantasy in movies, and literary fantasy.

Literary fantasy is capable of much greater depth and active-power than movies - because reading a fantasy is (potentially) a collaboration, while watching an movie is (mostly) a passive and immersive experience. Now, clearly many people read novels as substitute movies; and want to be 'drawn in' and pulled along'; they call a desirable novel a 'page turner' and are desperate to reach the end and know what happened.

But the best novels, and the best fantasy, is much more than that; which is why we always want to re-read the best work, and engage with it/ think about it rather than 'lose ourselves' in it. I am, of course, aware that there are many/ most people who never re-read - but there are many/ most people who simply 'consume' LotR; and at most have fantasies 'about' it, or 'based-on' it - rather than getting from it the special quality that fantasy offers. And there are people who have that kind of 'exploitative' relationship to all books.

The kind of ideal, active engagement I am talking of is almost sure to be personal and idiosyncratic; it can't be manufactured, and it must be based on a spontaneous affinity between the reader and the work (and its author). There are likely to be only a few books that evoke this kind of reading, for most readers - and the great bulk of our reading is on a lower level, and for lower motives.

But if we do have this relationship with a book - and I suppose it would be the ideal kind of relationship which both author and reader seek - then we perceive the basic unsatisfactoriness of other art forms, when it comes to the genre of fantasy.