I have been pondering what it is that I most value in my favourite books of the 'fantasy' genre - or indeed in other media such as movies and TV. And I think it is a particular 'enchanted' feel, which could be described as including both animism and providence.

Animism is the conviction that the natural world is alive and conscious - such that living beings (animals, trees) are also conscious; but most specifically those things that are usually considered to be not-alive ('dead') such as mountains, rivers, the sea - are also considered to be alive, aware, purposive to some significant degree.

Thus, when the protagonists of a high fantasy are on a journey, then the landscape through which they move is a 'character' (or series of characters) in the story.

Whereas in a low fantasy (sword and sorcery etc.) the landscape is just an environment: background scenery, or a series of challenges.

Providence in high fantasy refers to the fact (or sense) that there is someone in the background influencing the course of events; more generally that there is a purpose or destiny (direction or teleology) influencing events.

In high fantasy there is a 'macro' level of meaning, above or behind the plot.

By contrast; low fantasy may be set in the context of a 'micro', close-up reality that is not going anywhere in particular - and success and failure tend to be defined in terms of happiness versus misery, attaining personal goals versus being thwarted or killed.

From a Christian perspective, both animism and providence could be seen as referencing divine creation - a reality of meaning, purpose and personal relatedness; or even as a foretaste of the condition of Heaven.

In this sense, high fantasy is an intrinsically Christian genre - since the personal-divine basis of reality is pretty-much specific to Christianity.

Note added: The original English 'definition' of Romanticism comes from Wordsworth and Coleridge Lyrical Ballads (1798); in relation to which it was said that Wordsworth was writing about (implicitly animistic) nature, and Coleridge was dealing with the supernatural (with reference to some kind of providence).

Review of The Minnipins/ The Gammage Cup by Carol Kendall (1959)

I found this book after seeing it recommended by Lin Carter as being a good post-Tolkien, Hobbit-like children's' story. In fact; I found its (inferior) sequel first, in the Bristol City Library - and then afterwards bought a paperback copy of The Minnipins (also called The Gammage Cup in the US edition).

It has proved to be an enduring favourite of mine, which I have re-read multiple times over the decades - mostly recently last week.

The Minnipins is an nigh-perfect children's fantasy; and deserves to be considered one of the classics of the genre.

It ticks all of the boxes: assured and convincing world-building of a charming and believable society; likeable and distinctive characters; original and sinister baddies; good writing - prose and folk-rhyming - spanning from excitement through humour, lyrical beauty, with touching emotional scenes; and a very well-structured plot that moves through several interesting phases to a satisfying conclusion.

Perhaps what raises The Minnipins is its memorability. Some of the rhymes and 'maxims' (used for chapter headings) really stuck; and some of the scenes became vividly established in my imagination on an apparently permanent basis.

Hobbit music? From the Jaye Consort

This album was the first recording of Medieval Music I ever heard (borrowed from my history teacher and mentor John Reeve). This pioneering band (from 1967) is hilariously rough and ready, improvised and (obviously) done in a single take - in a pretty convincing recreation of how things might actually have sounded IRL. You will hear why I call it Hobbit music - due to the rasping intermittent drone of the longest instrument depicted on the cover. I can just imagine the rustics at The Green Dragon Inn, Bywater falling-about with laughter while dancing to this Estampie. 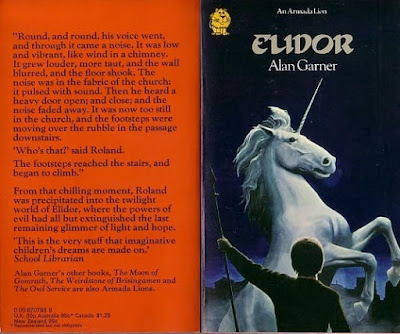 The cover of my teenage copy of Elidor

I have always been disappointed by Alan Garner's Elidor (1965); coming as it does between two of my very favourite children's fantasy books The Moon of Gomrath (1963) and The Owl Service (1967). Indeed, I simply did not enjoy Elidor when first I read it (aged 14 0r 15), or at subsequent attempts.

Yet, Elidor has been the most well-known of Garner's four children's fantasies; being often taught in schools, and leading to a BBC TV series. So I thought I would give the book another try - this time in the audio version read by Jonathan Keeble.

I can see why I was not much taken by the book, since it is structured more like a thriller than a fantasy. The fantasy elements are swamped by the detailed, realistic descriptions of physical and social life in Manchester and its suburbs - which are often grimy; replete with arguments, angst and stresses; and containing implied 'social commentary' (which are very likely the exact reasons why British school teachers appreciated this book above Garner's true fantasies).

Furthermore the book starts slowly and with a miserable tone. Following a deal of childish bickering, the fantasy land of Elidor is briefly glimpsed and seems almost-wholly unpleasant and hazardous. Malbron - the only Elidorian man the children talk-with - is a callous and unsympathetic character, and we know hardly anything about him - or indeed Elidor.

The early chapters set up the main interest of the book which is that four siblings have been given (against their will) the task of guarding four treasures of Elidor, needed to stop the land being destroyed.

However; I felt that I did not know enough about Malebron to be confident that he was honest, or to care whether Elidor was a place worth saving at great risk to the children.

The siblings return to modern Manchester with the treasures disguised as modern objects - and the best part of the book is the exciting middle section during which the children gradually realize that the treasures are hazardous (giving-off a strong and disruptive electromagnetic field).

The treasures are also attracting sinister warriors from Elidor - who are repeatedly trying to break-through to the modern world, and getting closer and closer...

After the slow pace and detailed descriptions of the main book; the ending is abrupt, feels incomplete, and is emotionally unsatisfying.

Furthermore - it is so complete a plot re-set, as to leave the children in their modern world without any record or residue of their experiences: apparently the modern world is completely unchanged by its period communication with Elidor.

So, the retrospective reframing of the Elidor narrative - looking back from its ending - is that its only purpose was to save a land we barely know; and that the process has been futile from a modern perspective.

Everything that happened 'might as well' have been a dream or a delusion (as some of the siblings tend to believe, about halfway through the story)...

And this was, unfortunately, Garner's own retrospective reframing (in Boneland some half century later) of his first two novels (Weirdstone of Brinsigamen and Moon of Gomrath) - as nothing more than dream-delusions of one of the child protagonists. As I remarked in my review - this is anti-fantasy, being subversive of fantasy - as evidenced by its rejection of eucatastrophe.

The actual ending of Elidor comes across as cynical, pretentious, and indeed aggressive.

This is very interesting to me in contrast with Garner's previous Moon of Gomrath; which ends with the liberation of the Old Magic into the modern world, and the implication that things will never be the same again - that, indeed, the modern world is just about to be transformed (for the better, it is implied) by a resurgence of enchantment and a renewed contact between Man, nature and the spiritual powers.

My best guess would be that Garner underwent some kind of profound disillusionment between the writing of Gomrath and Elidor - which left him increasingly bitter and resentful (which is how he generally strikes me, as a person).

But this is speculation; what is clear from the texts is that Garner lost his youthful optimism and decided to explore and evoke downbeat pessimism and despair in his later fiction, lectures and essays.

My evaluation of Elidor is that overall it fails structurally as a novel and as a fantasy; and fails to establish credible characters and motivations in relation to Elidor. On the plus side, it is genuinely tense and exciting through the middle section and until near the end - which section, after all, includes most of the book.