Infiltration, subversion and inversion of Tolkien

We live in a world in which all major institutions have been corrupted by New Leftism (political correctness) - and have now been substantially turned-against their original functions to 'converge' on being sub-divisions of the single, linked, totalitarian bureaucracy.

Tolkien is, of course, one of our greatest champions in opposition to this long-term trend - yet the professional interpretation of Tolkien is (of course) not exempt from these larger social trends; especially insofar as Tolkien's works have become the subject of study in universities and colleges; institutions that function as trail-blazers and standard bearers for the very worst evils of secular (anti-Christian) modernity.

Thus we come to a very extreme example of the phenomenon - a new book of academic essays called Tolkien and Alterity - 'alterity' being one of those tendentious inventions meaning 'otherness' in the New Left sense of anything other-than what Tolkien personally was: a married Christian family man, dedicated to his English ancestry, with a strongly traditional Roman Catholic sexual morality.

So the title means, in effect, Tolkien interpreted as anti-Tolkien.

The titles of the book chapters say everything needed:

Tolkien: A Bibliographical Essay on Tolkien and Alterity.
Race in Tolkien Studies: A Bibliographic Essay.
Revising Lobelia.
Medieval Organicism or Modern Feminist Science? Bombadil, Elves, and Mother Nature.
Cinema, Sexuality, Mechanical Reproduction.
Saruman’s Sodomitic Resonances: Alain de Lille’s De Planctu Naturae and J. R. R. Tolkien’s The Lord of the Rings.
Cruising Faery: Queer Desire in Giles, Niggle, and Smith.
Language and Alterity in Tolkien and Lévinas.
The Orcs and the Others: Familiarity as Estrangement in The Lord of the Rings.
Silmarils and Obsession: The Undoing of Fëanor.
The Other as Kolbítr: Tolkien’s Faramir and Éowyn as Alfred and Æthelflæd.

On careful consideration (for 10 milliseconds); I shall not be purchasing a copy - especially considering the standard price of a hundred dollars (minus one cent) for 270 pages...

The only consolation is that Tolkien and Alterity will (very probably) only be read-through by one or two individuals who are professionals in this specialised domain of 'scholarly' discourse; and bought only by academic librarians who are spending other-people's money...

(Sadly, one of the chapters is authored by Verlyn Flieger, who is now 84 years old and has written some of the very best Tolkien criticism and scholarship ever. I don't know what this specific essay is like - but her presence in this volume apparently confirms my observation that advancing age nowadays is more likely to be an incremental succumbing to the prevalent evil insanity than it is to be associated with 'conservatively' standing-against the foolishness and wickedness of ephemeral and evil dominant trends. Hence the large numbers of youth-emulating elders - often pierced, tattooed and plastically surgeried - that I see round and about nowadays.)

The Inklings depicted in the Bird and Baby 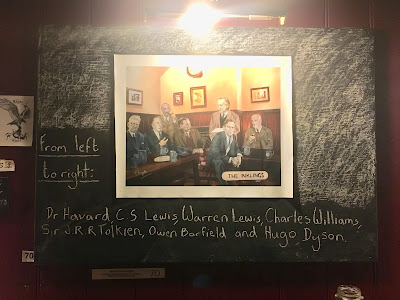 ﻿
This is a painting by Martin Macgregor displayed in the Eagle and Child ("Bird and Baby") pub in Oxford, and sent me by Keri Ford.

It isn't exactly what I was hoping for in an Inklings group portrait because the group is situated in the Bird and Baby pub rather than Lewis's rooms, and is a contrived formal portrait (done by re-painting photographs - which I recognise) rather than an actual meeting-in-action.

Also, it isn't exactly what I was hoping for because it is situated in the Bird and Baby pub rather than Lewis's rooms, and is a group portrait (done by re-painting photographs - which I recognise) rather than an actual meeting-in-action.

Strictly, in the early and most important years, The Inklings was the group that met in the evenings in Lewis's rooms to read-out and discuss their writing; rather than the bigger and looser lunchtime social-conversation grouping that met at the Eagle and Child, and also at the Lamb and Flag on the opposite side of the street. These lunchtime meetings continued for a decade for more beyond the end of the evening-reading group; indeed, into the time after Lewis moved to Cambridge University.

So - I think there is still need for a 'proper' picture of the core-Inklings in-action in situ!