Review of The Flame Imperishable by Jonathan S McIntosh 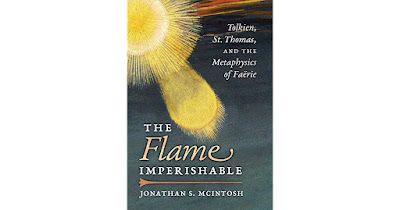 
For about a year, from late 2009 into 2010, about a year after I became a Christian - I was 'smitten' by the 'Thomist' philosophy of Saint Thomas Aquinas (and intending, probably, to become a Roman Catholic via the Anglican Ordinariate route).

I had already encountered 'Thomism', in the work of GK Chesterton, and EF Schumacher's Guide for the Perplexed - and most significantly in After Virtue by Alasdair MacIntyre who convinced me that the philosophy of Aquinas was the only rigorous, coherent, comprehensive system of metaphysically-rooted philosophy that had ever been devised. My Aquinas binge of 2009-10 confirmed that opinion from a mainstream Christian perspective...

Since that time I have travelled to an almost opposite extreme - first via the less-rigorous but more intuitively-satisfying Platonism of Eastern Orthodoxy; then to the almost-unknown, almost-totally unappreciated, and almost-opposite world of Mormon theology - where I have solidly set up residence for the past five-plus years (as a 'theoretical Mormon' - but not a member of the CJCLDS).

This, then, is my background with respect to Thomism: one of great respect, past enthusiasm and a partial knowledge (which never got so far as to read Aquinas himself in any quantity - just excerpts; but mostly books-about Aquinas).


In The Flame Imperishable, Jonathan McIntosh argues that JRR Tolkien's work was written from a background in Thomistic philosophy - which Tolkien absorbed during his childhood, especially; and furthermore that Tolkien's major work in the Lord of the Rings and the Silmarillion was written such as to be compatible-with the basic principles of Thomism.

This, McIntosh proves! - at least to my satisfaction; although I was already inclined to assume this was true before I read his book.

The Flame Imperishable is uncompromisingly a scholarly monograph - closely modelled on a PhD thesis; with the characteristic virtues and limitations of such a form. That is, it is thorough, impartial (presenting many sides of each argument in some detail; its conclusions are expressed with due reservations; and its language and structure are subordinated to these formal imperatives.

Which means the text is dense, incremental, even-toned - and, in sum, not at all an easy read! On the other hand, its appeal goes somewhat beyond the interests of professional scholars. I can, for example, think of quite a large number of Roman Catholic bloggers and authors who have a great interest in Tolkien's work - and these would certainly find that The Flame Imperishable added depth of understanding to their engagement with Tolkien - and probably too with Aquinas.


For me, the book was hard to get-into because my own metaphysical assumptions are so very different from those of Thomism - so that after reading not many sentences I would often turn aside and write notes from my own contrasting assumptions. In other words; McIntosh is right about Tolkien - but not about me! - and therefore reading it took on aspects of a debate.

In the end, speaking personally as a person who is fascinated by metaphysics and thinks-about it every day, and thinks it is the most important single thing for the modern world! - I found this book was an education, a stimulus to clarify my own philosophical ideas; and yet also a confirmation that I personally was correct in rejecting Thomism; whose baseline assumptions seem to me (the more I dwell upon them) so unnatural, so counter-intuitive, and such as to lead to what I would regard as reductio ad absurdum in some very important places.

But Thomism still is, and probably always will be, the most rigorous of comprehensive systematic philosophies - and if that is your priority, then you probably ought-to know more about it. So long as you are prepared to work through slowly, you could (I think) learn Thomism from The Flame Imperishable, via your existing interest in Tolkien*.


*Note: An alternative, or preliminary, would be Ed Feser's Aquinas of 2009; which well communicates the intellectual excitement of such a wide-ranging - indeed all-including - philosophical system.