I was always puzzled why the pterodactyl-bred, fell, winged beast upon which the King of the Nazgul rode should smell foul - since I would not expect a reptile to smell overpoweringly bad.

In the following excerpt it can be seen that the Nazgul's steed is indeed implied to be a pterodactyl (or some kind of dinosaur bird) and also that it stinks.

From The Battle of Pelennor Fields - The Lord of the Rings by JRR Tolkien - 1955.

The great shadow descended like a falling cloud. And behold! it was a winged creature: if bird, then greater than all other birds, and it was naked, and neither quill nor feather did it bear, and its vast pinions were as webs of hide between horned fingers; and it stank. A creature of an older world maybe it was, whose kind, fingering in forgotten mountains cold beneath the Moon, outstayed their day, and in hideous eyrie bred this last untimely brood, apt to evil. And the Dark Lord took it, and nursed it with fell meats, until it grew beyond the measure of all other things that fly; and he gave it to his servant to be his steed. Down, down it came, and then, folding its fingered webs, it gave a croaking cry, and settled upon the body of Snowmane, digging in its claws, stooping its long naked neck... Suddenly the great beast beat its hideous wings, and the wind of them was foul. Again it leaped into the air, and then swiftly fell down upon Éowyn, shrieking, striking with beak and claw.

And in the following excerpt can be seen the stinking pterodactyl making its earlier appearance:

From The Place of the Lion by Charles Williams - 1933.

As she gazed she heard another sound above, and looked up to see the earlier horror flying round in circles high over her. There she stood on the edge of a swampy pool, with the pterodactyl wheeling round in the sky, and one remote companion. ... Her voice failed; she heard herself making grotesque noises in her throat, and suddenly over him there fell the ominous shadow of the pterodactyl.

It was five minutes to eight. She thought abruptly, as she very often
did, "O I must get it." Doctor of Philosophy--how hard she had worked
for it! The...O the smell!

In full strength it took her, so violently that she stepped backward and
made an involuntary gesture outward. The horror of it nearly made her
faint. It must, she thought, be something to do with these new houses;
some corrupt material had been used. The smell was corruption. Something
would have to be done; the Council Surveyor must be called in. Perhaps
it wouldn't be so bad downstairs. Her window faced the fallen houses;
the dining-room looked the other way. She would go down and see.

As she moved the sunlight that was over her papers, except for the light
shadow that she herself cast, was totally obscured. A heavy blackness
obliterated it in an instant; the papers, the table, all that part of
the room lay in gloom. The change was so immediate that even Damaris's
attention was caught, and, still wrinkling her nose at the appalling
smell, she glanced half round to see what dark cloud had suddenly filled
the sky. And then she did come much nearer to fainting than ever before
in her life.

Outside the window something was...was. That was the only certainty her
startled senses conveyed. There was a terrific beak protruding through
the open window into the room, there was the most appalling body she had
ever conceived possible; there were two huge flapping wings; there were
two horrible red eyes. And there was the smell. Damaris stood stock
still, gasping at it, thinking desperately, "I'm dreaming." The beastly
apparition remained. It seemed to be perched there, on the window-sill
or the pear-tree or something. Its eyes held her; its wings moved, as
if uncertainly opening; its whole repulsive body shook and stirred; its
beak--not three yards distant--jerked at her, as if the thing were
stabbing; then it opened. She had a vision of great teeth; incapable of
thought, she stumbled backward against the table, and remained fixed. 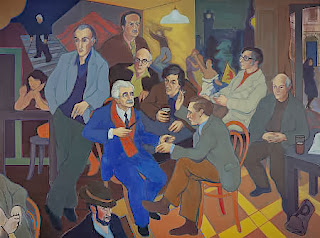 Posted by Bruce Charlton at 06:57 No comments: