All autumn in one tree - the Beech

The maple-dominated woods of New England are glorious in the Fall; but just one single Beech tree contains the essence of autumn. 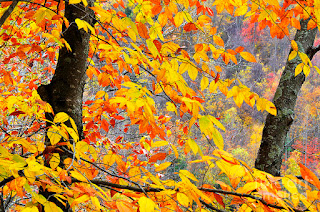 The colour of the Beech leaf in spring is pale, translucent green, with additional depths of pinkish brown in the Copper Beech.

The trunk of a large tree is smooth, grayish, with strong and graceful curves.

In autumn the leaf turns gradually from green through bright yellow, through orange to dark red - sometimes uniformly, sometimes in patches.

A single tree contains all of these colours and those in-between at the same time; and each tree is different - not just subtly but very obviously; and each tree varies day-by-day in its unique progression towards dark red or orange brown; and each branch or frond goes at a different rate.

Against a blue sky, or looking through the leaves towards the sun, the beauty of an autumn Beech is completely over-the-top; it is simply ridiculous that such wonders are so densely scattered that I may see two dozen utterly different perfections on my route to work.


[Note: I accidentally posted this here when it was intended for my Miscellany blog. However, the relevance to Tolkien, although unintended, is obvious.]

Four out of five stars

This is well worth listening to, and extremely well adapted so that little seems to be omitted (of course, inevitably, it is - but not obviously so), yet the pace is never rushed.

It is pretty eccentric, however; and would probably be most enjoyed by those who already know and love the book and are interested in a slightly different 'take' on it.

The only real fault is that it is sometimes difficult to hear the dialogue, especially when the voices are electronically treated (e.g. the talking thrush).

The eccentricities begin with wholesale mispronunciations of proper names - with the second syllable emphasized in worlds like ganDALF and torEEN (i.e. Thorin).

Paul Daneman is very good as Bilbo but does a lot of ad libbing and nervous mumbling - however, he unfailingly rises to the big scenes.

Heron Carvic is a very unusual Gandalf - with a nasal and over-enunciated acTOR-ish voice and highly irritable affect - yet again he is very effective overall.

The Elf King is given a bizzare, rasping electronically treated voice rather like a robot!

[The excellent narrator, played by Anthony Jackson, has a style of speaking which sounds as if modelled on Tolkien's distinctive patterns.]

The instrumental music is superb, medieval Krumhorns, Recorders and the like [done by the late, great David Munrow] - but I wasn't so keen on the songs.

Still these are minor quibbles concerning a very sincere and enjoyable production which hits all the right spots.

The Battle for Middle Earth by Fleming Rutledge. William B Eerdmans, 2004

This is a frustrating book because it is well worth reading - and perhaps could have been a classic of Tolkien criticism; but for the fact that that the author's self-indulgence introduced so many jarring and embarrassing anomalous elements.

The basic theme is very strong, and the line of argument about how divine providence or fate permeates Tolkien's world (and his world view) is extremely well argued.

But the author gives the impression of being one of those people who likes the sound of her own voice and airing her passing opinions. So the book is too long, and the superb insights concerning the underlying religious theme of Lord of the Rings are swamped by mere chit chat, or are padded out with other very dubious, trivial or idiosyncratic Christian parallels to the Tolkien.

The very striking and brilliant points, of which there are many, need to be mined out from the dross.

Worst of all, the book was written in the early 2000s during the throes of Bush-Derangement Syndrome (BDR) - in which `reality' for a female US Episcopalian 'priest' comes filtered through the distorting lens of the New York Times and National Public Radio - which are treated here as having quasi-Biblical authority.

From her repeated use of example, she really seems to believe that the USA under George W Bush, the response to 9/11 and the behaviour of the US/UK allies in the Iraq war, is a reasonable routine comparison with Sauron and Saruman, and with the temptations and moral failings of the heroes.

By contrast, Liberals, Democrats and their like are exempted from any except positive mention. The political partisanship is truly stunning, and indeed strikes me as pathological.

The author is utterly in thrall to Political Correctness, which means that all (so far as I could tell) of the (ridiculously over-pressed) examples she uses to draw parallels between the evils of the Lord of the Rings and the evils of everyday life are examples of the evils of US Republicans and Conservatives; and all of the virtues of modern life are of people and incidents which are approved by the Politically Correct.

She is also either a Pacifist, or very close to being one; and to read LotR from a pacifist perspective is to misunderstand it. Tolkien, like most people, was anti-war - but he was not a pacifist; and indeed understood that pacifism led to war and often to defeat - as with the appeasement of Hitler.

The distortion is bad, because JRR Tolkien was himself at the opposite pole from Political Correctness in his personality and in his work: he was so Conservative that his views were even extreme for the early 20th century and before the victory of Progressivism.

Tolkien was indeed so Reactionary that his views are simply off the chart in today's political climate. And he was of course a genius of intellect, insight and creativity. So these views should not be ignored and cannot lightly be dismissed without serious distortion: when the reader finds that he disagrees with Tolkien, there is a distinct possibility that it is Tolkien who was correct and the reader who is wrong, and that Tolkien simply sees deeper.

So Rutledge's, book is worth reading for the serious Tolkien scholar - but must be skim-read and unfortunately cannot be fully enjoyed. However, if a second edition is ever on the cards, this deeply-flawed book could be made into a superb one; simply by the liberal use of a blue pencil to shorten it by half, remove all contemporary references, and rein-in the garrulousness.

Note - In this version I have added scare quotes around the word Priest, for reasons of conscience. I did not realize three years ago that the flaws of this book are intrinsic to its having been written by a US Episcopalian Priestess. Although I gave it three stars, I have never (yet) gone back to re-read - which is very unusual for me in relation to Tolkien - so I would probably have to downgrade its rating to two stars, on reflection.