Review of the Audiobook Narnia Chronicles (2002)

Overall, I rate them as an excellent series; and a very valuable way to experience the Narnia books. Indeed, I would say that I enjoyed listening to these audiobooks (all at least twice, some more often) more than any other experience of the Narnia world - I got even-more out of the listening experience than I did from actually reading the books myself.

Having said this, and emphasising that all are at-least good; the quality of narration is a bit uneven. In particular, I liked least Michael York's reading of the first volume; which is unfortunate given that this is the most likely starting point.

Favourite was probably Kenneth Branagh's Magician's Nephew, from which I realised that this volume was much better than I had realised before; and Alex Jenning's Horse and his Boy, which was a sheer joy from start to finish, exceeding the expectation I had had from this least known but most 'perfect' of the Narnian stories. Jeremy Northam has prepared meticulously and lets the story of the Silver Chair speak for itself. I would also commend Patrick Stewart for the versatility of his Last Battle; spanning the full range from utter despair to Heavenly joy.

It is interesting to me that I did not especially like the Narnia books as a child; and - apart from LW&W I think I only read Silver Chair... or some of it. I tried to re-read them about 20 years ago, before I was a Christian, but didn't get very far... Somehow, they just didn't 'grab' me (and certainly nothing like I experienced from reading The Hobbit). Even after I was smitten with Tolkien-mania as a teen, and then later still became fascinated by the Inklings, I had to rather force myself through Narnia...

It was Brian Sibley's BBC dramatised version - which I bought in a boxed set in a bookshop sale on CD, and which the family listened-to during car journeys around a deceade ago - that really opened-up the Narnia stories for me (for which, many thanks!)

Since then, I just appreciate them more and more; get ever more from them with each experience, and from reading scholarship and criticism of the series - and would now regard the the Narnia Chronicles as one of my absolute favourites... a Desert Island book.

Over the past couple of years I have come to regard Romantic Religion by RJ Reilly as one of the very best books I have read - I am now on my third slow, detailed read-through.

The book is probably the earliest (1971) serious study of the ideas of The Inklings - and its central chapters focus on Owen Barfield, C. S. Lewis, Charles Williams and J. R. R. Tolkien. As such, and despite its narrowish selectivity; RR remains far-and-away the deepest and best explanation/ analysis/ advocacy of the underlying (implicit) significance of this literary, philosophical and theological group of friends.

The title Romantic Religion encapsulates the thesis; although in fact it would be more accurate if the title were Romantic Christianity, since that is The religion at issue here; and one that could not be substituted by any other.

The method is to define Romanticism, mainly by means of its historical lineage; and then (in the first main section) to use Barfield as the philosopher who best understood Romanticism and its unique significance and necessity. Lewis, Williams and Tolkien are then considered separately in terms of how they exemplify, and how diverge from, the framework of Barfield.

This time reading; I have become convinced that Romantic Christianity is the best term for what I personally believe, and regard as the essential future of Western Man - and especially English Man! I shall probably be referring to myself, in shorthand, as a Romantic Christian from now onward.

Of course Romantic (and Romanticism) are mostly, in the cultural mainstream of the past century and more, rather widely differently understood from the Inklings (and especially Barfield) mode. Indeed, 'romantic' is usually a pejorative or pitying term, signifying escapist, wish-fulfilling unrealism.

Nonetheless, Romantic remains the best term, for both its historical and etymological accuracy - and because many of the common ideas of 'Romantic' are entirely appropriate and correct from a Barfieldian-Inklings perspective: for example, a focus on love, creativity, fantasy and imagination, nature, ecstatic emotion, inspiration and intuition.

All of these seem to me desirable, as well as necessary; so long as they are rooted in Christianity. Indeed, it was-and-is the subtraction of Christianity from Romanticism, as early as Byron and Shelley, that led to the degeneration of the historical Romantic movement: degeneration into hedonism, Leftist politics and the sexual revolution.

No doubt I shall quote from Romantic Religion in the future; but anyone who shares my conviction on these matters, and who is prepared to make the effort to engage with such a book, would need to read RR; if not entirely, then at least extensively.


Note: I find it significant that such an outstanding piece of intellectual and critical work, by such an deeply intelligent and rigorous scholar, should originally have been done as a PhD thesis at Michigan State University (a long way from the Ivy League); by an academic who was teaching rather than research orientated (he spent his career at the University of Detroit); and it was issued by an obscure publisher: The University of Georgia Press. This confirms a pattern I have often observed with genuinely high quality and original work in the late 20th century - it comes from the cultural periphery, not the centre. Or rather - what is officially the centre is actually trivial, derivative or corrupting - almost wholly, and vice versa. The reasons will be obvious to regular readers of this blog. 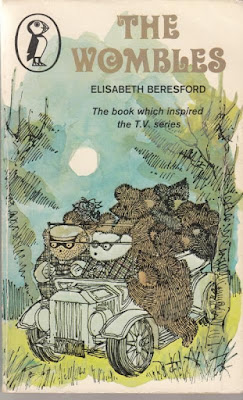 After reading The Hobbit in the early 1970s I suffered a kind of craving for more of the same; or, since (after finishing Lord of the Rings) that was not possible; then for something similar.

In A look behind the Lord of the Rings (1969), Lin Carter made reference to the Minnipins novels (The Gammage Cup and the Whisper of Glocken) by Carol Kendall - and I managed to find the two books about these rather Hobbit-like people; which I greatly enjoyed (and have re-read many times - including aloud to my children).

Other Hobbit-like stories came from the Wombles which were in a series of books by Elizabeth Beresford, and some delightful BBC stop-animation puppet features broadcast from 1973-5; commencing shortly after I was gripped by Hobbit-mania.


The Wombles are rounded and comfort-loving, furry all-over (not just their feet), live underground - and, in a sense, represent how Hobbits might have adapted to living hidden in the modern world; since they live by scavenging whatever is lost or abandoned on Wimbledon Common in London; and improvising from it everything that they need.

For a few years, Britain was gripped by an obsession with Wombles; including a Wombles pop-group (comprising grown men in hypertrophied costumes miming to recordings) that released a series of initially OK but progressively worse-and-worse songs about Wombles. In sum; Wombles were overexposed and hyped to the point that everyone was thoroughly fed-up with them, and glad to see the back of them.

Nonetheless, the original book and the TV series were charming, cozy, entertaining and Hobbit-like.

Posted by Bruce Charlton at 12:41 No comments: