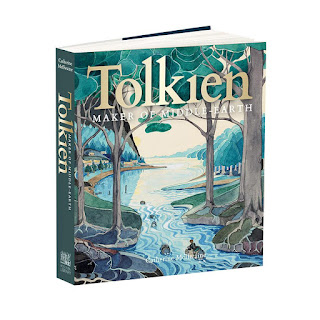 This is a sumptuous, large format, beautifully illustrated 400 page book which serves as the catalogue for a current Tolkien exhibition at the Bodleian Library in Oxford - but it also serves as the single best, and best value, one-stop-shop for the visual material associated with JRR Tolkien.

Amongst other achievements, Maker of Middle Earth includes - in larger scale and at a higher quality of reproduction - much (not all) of the material from The Tolkien Family Album (1992) JRR Tolkien; artist and illustrator (1995).

In addition it has some seventy pages of essays (by eminent scholars) on Tolkien's biography, the Inklings, Faery in Tolkien, the Elvish languages, the Northern spirit, and Tolkien as artist.

For me, there were several special pleasures in this book. The first was in seeing new-to-me photographs of Tolkien and his family - and seeing larger and sharper versions of many I was familiar with and especially like; such as JRRT asleep with toddler Christopher on a garden lounger in Northmoor Road.

I enjoyed seeing Tolkien wearing a tweed suit and digging a sandcastle on a (presumably chilly) 1925 summer holiday, with sons John and Michael. There are several characterful photographs of JRRT's mother; and of his young and beautiful wife Edith, showing why Tolkien regarded her as the inspiration for Luthien. In general, these family pictures are delightful, revealing the happiness, love and importance of this vital aspect of Tolkien's life (something which sets him apart from the other Inklings, and indeed from most other writers).

All my favourite Tolkien paintings, pen and pencil illustrations were there; and some examples of the complex doodles he distracted himself with, while trying to work on The Silmarillion.

There are a lot of letters and manuscripts in facsimile - not just Tolkien's wondrous script; but an example from 1893 of his mother's fine and original penmanship, suggesting an hereditary element. And several 'fan letters' - mostly from now-famous people; the 19 year old Terry Pratchett, for example, evidently having been deeply moved by Smith of Wootton Major. Some letters were from children - I  liked these better.

(My letter to Tolkien didn't make the cut, I'm afraid - I wonder what I wrote? Questions about elves, I expect.)

There are also maps! - sketch maps, drafts of maps, fragments of maps; reproduced in large scale and clearly.

And there is something I have wanted to see again for a long time... the 1969 poster map of Middle Earth illustrated by Pauline Baynes (below). For many formative years this was a fixture on the wall of my bedroom - carted from place to place. I spent many an hour examining the pictures with a magnifying glass, to extract the last drop of detail... There was another similar, but not quite so good, poster of The Hobbit. 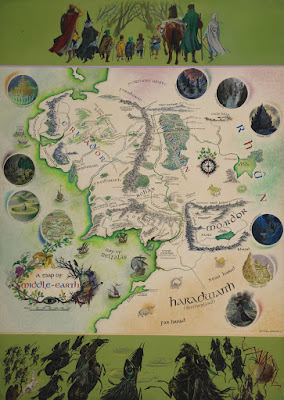 Is the Pauline Baynes map a fold-out? Otherwise, it's hard to see how its superb detail would all be legible. I'm a map-lover; my wife and our sons would say map-addict, and I don't really dispute them. I attribute that enjoyable addiction, which has never waned, to two things. One was ready access through schooldays to The Times Atlas of the World - the really good one from circa 1960, that was in several volumes - and Tolkien's Middle Earth maps. When I was 12, I made a laborious pencil-copy, freehand, of Tolkien's Middle Earth map from The Fellowship of the Ring. Not sure quite why, but it was something I felt pulled to do.
For map-lovers, it's hard to beat old (stress on that) Ordnance Survey maps.

Also hard to beat, for map-fanciers drawn to Albion as well as Middle Earth, are John Speed's ca. 1600 maps: http://www.lib.cam.ac.uk/collections/departments/maps/digital-maps/john-speed-proof-maps.

I agree about the wonders of the Mid-Century Times Atlas -- five elephant folios bound in red. Would you believe that I acquired the set from a library book sale at, as I recall, 25 cents each?

Incidentally, the writing of topographic romances with English locales could be a way to advance "Albion Awakening"-type dispositions.