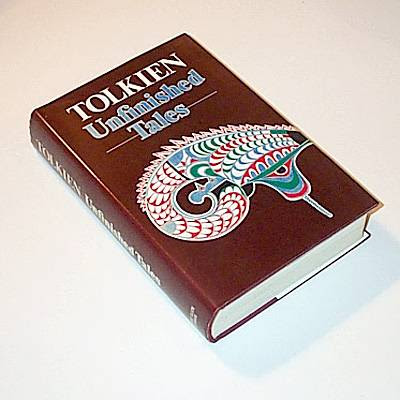 It is a controversial choice, no doubt; but for me Unfinished Tales - the first 'History of Middle Earth volume, edited by Christopher Tolkien and published in 1980 - is the noblest of Tolkien's works: the one that has the most heart-stopping passages of high style and grandeur.

I came across this book in the summer of either 1985 or 1986, when I found a paperback copy at a holiday cottage rented by my parents; and it was responsible for triggering a resurgence of love for Tolkien which had by that time subsided from the heights it reached in my middle-late teens.

After JRR Tolkien died in 1973, his youngest son Christopher (by then nearly fifty years old) took responsibility for his legacy, especially the unpublished writings - during which CRT became, in my opinion, the most important - because irreplaceable - literary scholar of the past century.

Christopher began* with a stumble (as he later acknowledged) with the 1977 Silmarillion - but with  Unfinished Tales he hit his straps, and from then continued in a truly transcendent synergy with his father's writings. It is perhaps this being the very first of CRT's couple of dozen collections from the unpublished writings and drafts, that gives UT its special place in my heart. Since CRT (apparently) did not know in 1980 whether UT would be the only selection from JRRT's unpublished manuscripts; UT has the character of being something like The Cream of these works - sampled from across a wide range of times and subjects.

The whole collection is wonderful - but I will here mention just a few of my personal favourites.

Of Tuor and his Coming to Gondolin is a detailed fragment of a large but incomplete narrative. I find the character or Tuor very appealing, and (as an unseen frame) the sketched story has the ultimate happy and strange conclusion that Tuor - a Man - eventually (somehow) became an Elf: one of the Eldar.

There are two pieces on Numenor; which together make the best source on this fascinating 'earthly paradise' devised for Men: its early freshness and innocence, and its later extremity of both power and corruption. Truly, a tale for our times...

The History of Galadriel and Celeborn is a miscellany, and indeed self-contradicting (but I don't care about that); and studded throughout are answers to some of the questions about Elves I had been most longing to have answered for many years - especially about the Silvan/ Wood Elves, which have always evoked a great yearning within me.

Cirion and Eorl is about the friendship of Gondor and Rohan; and contains a lovely account of the oath-making between the leaders of these nations: that is certainly one of the noblest passages Tolkien ever achieved. It moves me to tears.

The Quest of Erebor is a pure delight - being a 'framing' account of The Hobbit narrative from Gandalf's point of view. At only a slightly lower level; The Disaster of the Gladden Fields, and The Hunt for the Ring deepen the understanding and appreciation of Lord of the Rings.

The Istari (i.e. the wizards) was another chapter I seized upon with eager cries, since (like so many people) I had been particularly intrigued by Gandalf, Saruman and Radagast; and here we get their back-story.

The hardback edition ends with a corrected, added-to and improved version of Christopher Tolkien's fold-out map of Middle Earth, modified from the one he originally drew for The Lord of the Rings. Ideal for reference - and a treasure in its own right.


*Note: I should add that even before the Silmarillion in 1977, CRT had edited and published several 'minor' works by his father; such as the Bilbo's Last Song for a poster by Pauline Baynes; and the translations of Sir Gawain, Pearl and Sir Orfeo; and Baillie Tolkien (CRT's wife) had edited the first collection of Father Christmas Letters.

Sounds terrific. A must read!

Ashamed that I have not yet read this.

A grand - and poignant - book! I've gone back to it most for Narn i Chîn Húrin, but this post makes me think I 'need' to reread all of it! (Part of its poignancy is the sense of a studio peopled with torsos - how happy we are to have it, how wonderful if these could have been finished and more of the Silmarillion material could have been retold in the style encountered here.)

That's it. Or rather, much of the 1977 Silmarillion material originally *was* told in the style encountered in UT (as we now know from the History of Middle Earth) - but excessive line-by-line editing (preusumably by CRT and his assistant Guy Gavriel Kay), excessive compression, and too much emphasis on the exclusion of inconsistencies combined to drain the prose of vitality and sparkle. CRT had learned from the experience of the 1977 Silmarillion!