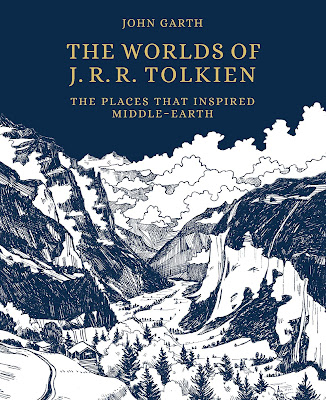 John Garth is one of the best and most important writers on JRR Tolkien. This is his first full-length book since the landmark volume Tolkien and the Great War of 2003; so I knew I would enjoy it.

From the title, and the fact that it is a large format, really beautifully-produced, hardback volume; I supposed The Worlds of JRR Tolkien might be dominated by the pictures, maybe even be something like a superior 'coffee table' book? I supposed that I might be able to read it in an hour or two... I could not have been more wrong!

This book is absolutely packed with information, a considerable amount completely new to me; analyses, comparisons, discussions, perspectives...

For example, the chapter on 'Craft and Industry' is a fresh examination of the Birmingham links; clarifying that the city was originally composed of thousands of small workshops, making 'toys' of a very hobbit-like kind: buckles and buttons and the like. Tolkien's Grammar School bulidings (now demolished) were one of the great examples of Victorian Gothic revival. And, in general, it would seem that Birmingham and its environs had many positive aspects to contribute to the assimilated childhood and youth experiences of Tolkien, upon which he mainly drew in his writing.

Another stunning chapter was entitled 'The Land of Luthien', and this focused upon maps. There is enough inspired analysis in this chapter to make a whole book. I was particularly gripped by the multiple diagrams where Garth superimposes Tolkien's Lost Tales, Silmarillion and Lord of the Rings maps onto the modern geography of the British Isles (sometimes altering scales). He does this several times, demonstrating what we get from various possible identifications of specific Middle Earth places with specific British cities (e.g. Hobbiton and Oxford) or rivers (e.g. Lhun with Severn).

Other chapters focus on the sea and coastline, mountains, rivers and lakes, towers, warscapes, and - of course! - trees, woodland and forests!

So in broad terms; this book is about the influences of Place on Tolkien's work. It can immediately be seen that this is an entirely appropriate subject matter; because Tolkien is, perhaps above all others, a creator of places. Influences are traced in both directions: from the Tolkien's important places to their possible usage in his works; and from the striking places in Tolkien's works, looking back to possible real locations and experiences that may have contributed to them.

Throughout, Garth manages to maintain the 'right' tone. On the one hand he acknowledges that this is a serious study, about a writer who for many people (including myself) - is The most important of modern fiction authors. On the other hand he maintains a lightness of touch about the activity - allowing himself to speculate (and report the speculations of others) even when these are somewhat wild and loose.

In the event, the book took me several days of intense reading - the process interrupted frequently by setting it aside to think; and by reading out passages, showing pictures, and expounding 'fascinating facts' to my family.

The Worlds of JRR Tolkien is clearly a labour of love; a considered product of thought; fuelled by a deep appreciation of Tolkien and his works. You could buy it as a handsome gift, because it is an exceptionally fine volume: built to last. But anyone who engages with the text and illustrations will discover greater depths and deeper fascinations; and find this to be a major resource for the serious Tolkien reader.