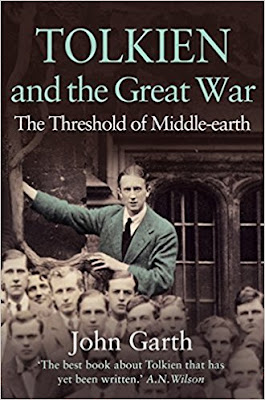 One of the half-dozen best books ever written about Tolkien; and indeed one of the best books about friendship, war, and the formation and nature of a genius.

This audio version is well read by the author, who has a rare gift for speaking poetry.

Listening to Tolkien and the Great War moved me to tears more than once, despite that I already owned and knew the paper version - this brings an extra dimension.

It is not just a wonderful biography of Tolkien; it is just one of the best (of many hundreds) of 'biographies' that I have read.

Tolkien and the Great War is not a full account of Tolkien's entire life; instead it operates in the sub-genre of specialised biography that focuses on a particular time and aspect of a person.

This focuses on the forces that shaped 'John Ronald's formative life in childhood, at school, as a university student, in the army and shortly afterwards; the thirty-ish years before he became the more familiar scholar and author 'Professor Tolkien'.

Close attention is given to Tolkien's early poetry (until his middle twenties he intended to become 'A Poet', and even submitted a volume of poetry hoping for publication); and the Lost Tales stories - which were later - albeit at some cost of concreteness, vividness and humour - shaped into the more familiar 'Silmarillion' narrative/s.

One special fascination of the Lost Tales is their biographical applicability; the way that characters, places and incidents derive-from and map-onto Tolkien's life and reading. On the one hand this is a mark of their immaturity and rawness; on the other, it is what makes them worth our attention nowadays; above and beyond them being 'early drafts' of more achieved later works.

My own special interest in Tolkien and the Great War is that it helped me to understand, actually to feel, the deep motivations of Tolkien's creative writing.

Thanks Bruce. Does he say much about the TCBS and the values that animated the group?

@John - Yes, that is probably the main theme of the book. These values grew from the early days, when the group was mostly for conviviality and humour (as reflected in the name) to the late days when they were extremely idealistic; and intended to reform England spiritually.