Tolkien and The Machine 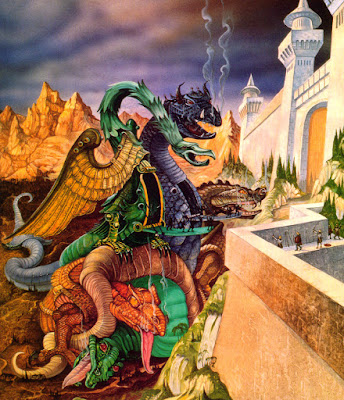 Melko's Machine-dragons invading Gondolin, by Roger Garland, as described in the Lost Tales and based on his personal experience of seeing the first tanks at The Somme


JRR Tolkien was hostile to what he termed The Machine - by which he meant some physical or social contrivance to attain an end directly; at the cost of being a mere model of reality, which is to say partial and distorted.

Exponents of The Machine in Tolkien's reality began as early as Melko in the Lost Tales (who later became Melkor-Morgoth), the late and corrupt Men of Numenor (who used magical technology to conquer Middle Earth, and to invade Valinor), and Saruman (with his mind of 'metal and wheels'). The One Ring is itself a Machine - promising the user a coercive short-cut to his desires

Tolkien was intensely suspicious of machines of any degree of complexity - his Shire Hobbits 'did not understand or like machines more complicated than a forge-bellows, a water-mill, or a hand-loom'. Even the simplest of Machines, such as a bow and arrow, introduce new temptations (the ability to kill at a distance, and impersonally).

Yet he recognised that even these simple machines could be a 'slippery slope' to evil. The greatest craftsmen of the Noldorian High Elves, Feanor (who made the Silmarils, the Palantiri, and invented elvish script) and Celebrimbor (who made the elven rings, but who aided Saruman in ring-lore) - were to a greater and lesser extent corrupted and seduced by the Machine.

Another Machine is bureaucracy (including the military) - the narrow specialisation and coordination, by coercion and bribing, of individuals to attain a single imposed purpose: this was what Saruman did first in his Empire and later to the Shire Hobbits.

Even learning itself (and Tolkien was a professional scholar) is a Machine, and can corrupt - Saruman seems to have been corrupted mainly by studying 'the arts of the enemy' - initially in order to understand and better fight him.

I think Tolkien would, if pressed, even have regarded such Machines as writing and books, music and art, as fraught with peril, in the hands of Men. the High Elves love of such this-worldly things is so intense as to be corrupting, as the strive to stop change, never to forget, sinfully to hold on to that which ought to be let-go-of...

In sum, I think Tolkien regarded The Machine as a temporary mortal contrivance to go beyond Man's natural capacities, and therefore always corruptible.

The Machine is always incomplete and distorted, and Machines will be superseded in Heaven where Man will be raised to attain directly and wholly that which can at present only be approximated by insufficient contrivances.

The crucial aspect is probably that a machine is (to Tolkien and most people who are not engineers) a physical embodiment of a means which can never be an end in itself, as opposed to the creations of God, which are all things that are always more than mere means.

Of course there are those to whom a well-designed machine can be as much an end in itself as any work of art, but looking back on the age in which Tolkien lived the aesthetic eye understands the feelings of those who saw machines generally as ugly crudities designed and employed with no thought of beauty or elegance.

And even today, many machines have sleek exteriors that contribute nothing, while the 'gubbins' are an affront to the eye. Though the evolution of common design principles and the drive for efficiency mean that a lot of good engineering is also beautiful, there are always slap-dash "brute force" or "good enough" solutions to various problems.

Thank you! You range widely with splendid compactness!

You and your readers might be interested in the discussion in the comments here between Fr. Angelo and myself, especially from 19 February on, not least about Tolkien on 'magia' and 'goeteia':

Thanks David, I took a look.

@CCL - I have come to believe that Tolkien's critique of the machine runs very deep, and ultimately is against all machines of every kind - even the simplest... or, more exactly, that he felt that over time in the temptations of the world, even simple machines *would* be put to corrupt uses.