Tolkien - first picture of his genius 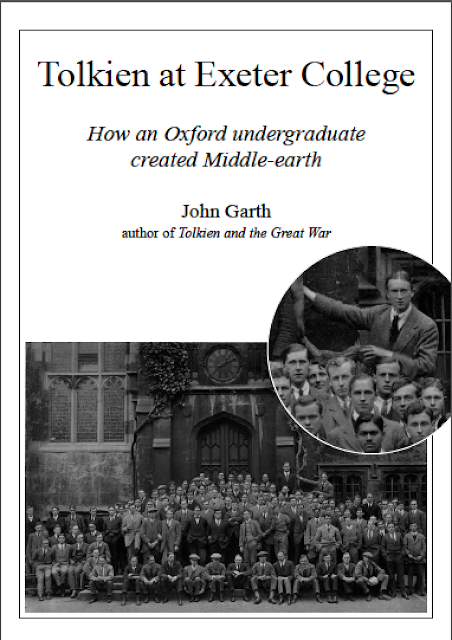 The cover of John Garth's pamphlet 'Tolkien at Exeter College' gives us the first picture of JRR Tolkien (in 1914) in which his genius is apparent... or, more exactly, a picture that is consistent-with some key aspects of Tolkien's genius.

The inset circular photograph of young Tolkien is a blow-up of the larger group photo; where Tolkien is situated at the extreme right of the back row.

Having squeezed himself into the photo at the back, Tolkien chose to stand apart from everyone else, leaning from the top step; almost hanging by his right hand from the trunk of a cultivated tree, with his left hand enclosing the bark affectionately. The face is difficult to read, but seems to proclaim confidence and a kind of defiance.

This the the photograph of a self-motivated nonconformist, a man ploughing his own furrow, listening to inner  - not a 'poseur' because, being at the back, nobody could see what he was doing; he was not showing-off, not making-a-point by his unorthodox stance (unlike like some of the chaps slouching in the second row!).

Tolkien's position and pose was an unconscious expression-of, rather than a public assertion-of, his independence and inner motivation.

Of course there is a lot more to being a genius than what we can see in this photograph, but some of the essential components are there, on display, aged 22.

Jolly to think we have such a vivid photo of him a couple months before he would write 'The Voyage of Éarendel the Evening Star'!

(And what another thoroughly enjoyable (if this time, little) Tolkien book by John Garth!)