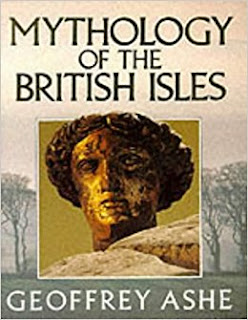 Tolkien included Giants in several of his stories - although not in The Lord of the Rings - despite their appearance in The Hobbit. This was natural, since there is abundant evidence for the historical reality of Giants - including in Britain, where they were the first inhabitants. Giants are, understandably therefore, probably more evident and important in the oldest English history/ legend/ folklore than elves, dwarves or dragons.

How to discover more about such matters? Well, Geoffrey of Monmouth had access to a now-lost book of the deep and mythic history of Albion - a book which, I imagine, would have provided almost exactly what JRR Tolkien felt was missing from his country's culture - 'a mythology for England'.

Our modern Geoffrey - Geoffrey Ashe, the Greatest Living Englishman - made a really excellent job of filling this gap with his Mythology of the British Isles of 1990.

Ashe uses Monmouth's book as a skeleton, fleshed out with all other available and relevant sources to provide a clear and concise mythical account at the start of each chapter, followed by scholarly commentary and footnotes.

If someone extracted the mythical sections, and arranged them sequentially; when imaginatively-illustrated and published as a unity, this could make a wonderful Child's History of Albion.

The first Geoffrey - of Monmouth - clearly influenced Tolkien who draws upon it often (as have so many hundreds or thousands of other writers for many centuries - including Shakespeare, via Holinshead), but the 'flavour' of his great book was not really to Tolkien's taste. It is, indeed, over-filled with bloodthirsty battles, intrigues and deceptions. But then, so are the Norse Sagas...

Nonetheless, Monmouth's is our best annalistic source for mythically imaginative hints of deep truths from our island's story; hints that may intuitively be developed into real myths.

And our contemporary Geoffrey has made from it an even better resource for modern fantasy writers.

Thanks for this - my attention to Geoffrey Ashe - reading him, even hearing him lecture - has clearly been too narrowly Arthurian!

I think this ties in interestingly with Ethan Campbell's contribution to our current series at A Pilgrim in Narnia, also with regard to the discussion of "etaynez", "ettins", "eotenas", and 'ents' in the comments:

I'm not sure if we know that Sebastian Evans's translation, appearing first in the Temple Classics series as Geoffrey of Monmouth in 1904 before reappearing as Histories of the Kings of Britain as Everyman's Library volume 577, was known to Tolkien - or the other Inklings - but it seems likely, being such a quick easy ready reference even for the good Latinists among them, as for so many of us, ever since, even after the appearance of Lewis Thorpe's Penguin translation in 1966 (the first form in which I read Geoffrey).

I do know that Lewis said some very nasty things about Geoffrey in Studies in Medieval and reniassance Literature. I would guess he read him in Latin, but I don't know.