The Place of the Lion audiobook; my favourite of Charles's Williams's novels now available in a reading by David Pickering 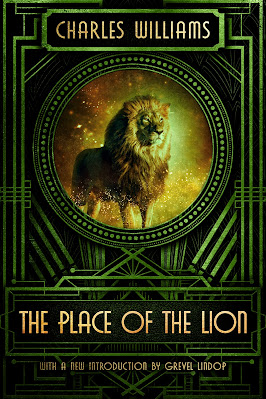 The Place of the Lion by Charles Williams is one of my favourite novels, which I have read multiple times over a span of some thirty-five years.

It is also - I believe - the work which, when they encountered it in 1936, triggered both CS Lewis and JRR Tolkien to write fantasy for adults - Lewis's Space Trilogy, and Tolkien's Lost Road/ Notion Club Papers which fed into the increasingly-adult Lord of the Rings.

Of these; PotL most-resembles That Hideous Strength and The Notion Club Papers; as being about the breaking-into mundane life of profound and threatening spiritual realities. Place of the Lion has an appealing 'mundane setting', with several pleasant and likeable characters, and a high spirited overall feeling - as well as plenty of both physical and spiritual peril. To me - PotL is by far the most wholesome of Charles William's novels.

Therefore, for most people, if you are intrigued by what you know about Charles Williams, and you want to try something by him; Place of the Lion is probably the best place to start.

And for those who, like me, appreciate hearing literature read aloud - there is now an audio-version of Place of the Lion which includes an informative introduction by CW's biographer Grevel Lindop, and is narrated by actor David Pickering.

Pickering's particular contribution is that he is able to make clear and comprehensible those parts of the text where the reader is most likely to lose the thread - as the reader's eye skips too quickly and lightly over important points.

For example, when I first read this book, I found the critical first scene - when The Lion  makes his appearance - difficult to grasp; because there Williams makes a distinction (that turns out to be vital) between a Lion (implicitly here meaning a male lion) and a Lioness. But by vocal-acting (i.e. careful emphasis and intonation) Pickering is able to distinguish and keep separate these creatures, and to bring-out CW's intended significance.

As with any good reader; the audio version brings-out interesting and surprising aspects of the story that I hadn't previously noticed. No matter how many times you have already read Place of the Lion, I think you will find that listening will probably add to your appreciation.

Note: Apocryphile Press have also produced several other audiobooks of CW's novels, and a wide range of his written works.

That Canadian short radio play version (available in the Internet Archive) was good in a lot of ways, but annoyingly 'artsy' at times.

It would be good if someone did high-quality audio versions of Williams's plays, too (say I as unsuccessful director of an attempt at Thomas Cranmer of Cnaterbury, back in the day: the visuals would be lost, but the organizing would be easier with ' multitracking', etc.).

A Tolkien Homecoming recording would be good to have as well!