Another Tolkien-Birmingham connection: Ramer's meteorite identified as the boulder in Cannon Hill Park, Edgbaston (from the Notion Club Papers) 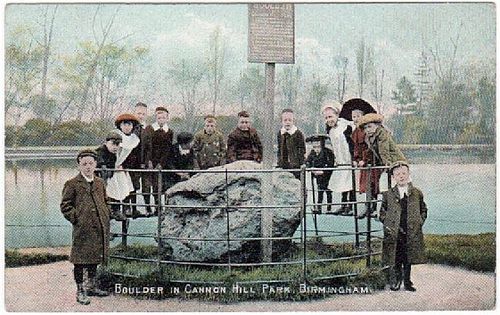 From The Notion Club Papers - by JRR Tolkien:
[Ramer speaking:] "There is a very large meteorite in a park, Gunthorpe Park in Matfield, where I lived as a boy, after we came back from abroad; even then it had a strange fascination for me. I wondered if it could have come from Malacandra. I took to hobnobbing with it again, in the vacs. Indeed, I made myself ridiculous and an object of suspicion. I wanted to visit the stone alone at night - to lessen the distractions; but I was not allowed to: closing hours were closing hours. So I gave that up. It seemed to be quite without results."
"So the poor old stone was left all alone?" said Lowdham.
"'Yes," said Ramer. "It was. It is a very long way indeed from home, and it is very lonely. That is, there is a great loneliness in it, for a perceiver to perceive. And I got a very heavy dose of it. In fact I can't bear to look at such things now. For I found, about the end of the long vac. two years ago, after my final visit, that there had been results. It had evidently taken some time to digest them, and even partially translate them. But that is how I first got away, out beyond the sphere of the Moon, and very much further."
"Travelling on a dream-meteor!" said Frankley. "Hm! So that's your method, is it?"
**
Ramer is one of several Tolkien alter egos - serving partly as a mouthpiece for some of Tolkien's deepest convictions - in The Notion Club Papers.
I have long been fascinated by this passage - which has (to me) the ring of personal experience about it; yet Christopher Tolkien was unable to suggest a real life origin for his Father's fictional version of the meteorite and park.
I now think it very likely that the 'boulder' in Cannon Hill Park - depicted in an old photo above (the boulder is still in position nowadays, but without railings or an information board) - was the 'original' for Ramer's meteorite.
This suggests that the young Tolkien may well have had some analogous childhood experience with the Cannon Hill Park 'meteorite', to that which Ramer describes for the fictional Gunthorpe Park.
Linking evidence:
1. Gunthorpe Park seems like a pun on Cannon Hill Park.
(I invite readers with an understanding of etymology to discern whether there may be any other puns linking the fictional and real-life park- and place-names.)
2. Ramer says "where I lived as a boy" - Tolkien lived as a child in Edgbaston, Birmingham; where Cannon Hill Park was located - indeed, the Park is included in modern 'Tolkien trails' within the city.
3. Although the boulder is nowadays apparently regarded as a glacial erratic - there are several online accounts from people who played in Cannon Hill Park as children, who say they always regarded it as a meteorite.
It seems probable that the boy Tolkien would have regarded the boulder as a meteorite - the 'dream-meteor' that Ramer had used to travel in time and space via mystical communion and lucid dreaming*. 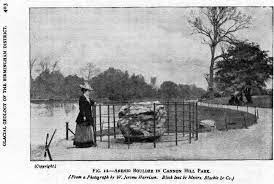 c 1900
Footnote: Wayne Hammond and Christina Scull (authors of The JRR Tolkien Companion and Guide) made the following comment in an e-mail which I quote with their permission:
Your speculation seems sound. And if it is, then certainly Gunthorpe Park could be a play on Cannon Hill Park. But there's also the point that thorpe 'hamlet, village, (remote) farm or settlement' is etymologically connected with terp 'mound, hillock' (as the site of a village). Thus Gunthorpe could conceivably play on hill as well as on cannon.
*A meteor is the name for the travelling rock while it is in space and enters the earth's atmosphere; a meteorite is the term for that rock which remains after a meteor has survived its atmospheric transit, and has landed on the earth.
Posted by Bruce Charlton at 11:25

Wow - thank you for this! A striking coincidence of Tolkien's geological and astronomical interests? And, how much may the one have stimulated the other in encountering this in Cannon Hill Park? Where did you get the photograph by William Jerome Harrison? I see his 'Bibliography of Midland Glaciology' occupies pages 116-96 of volume 9 of the Proceedings of the Birmingham Natural History and Philosophical Society scanned in the Internet Archive. And, what might Tolkien have read about meteorites, and when? E.g., I find scans of a couple editions of Sir Lazarus Fletcher's Introduction to the Study of Meteorites in the Internet Archive. That Birmingham Images entry includes "It was found when the lake was excavated." Would it be too far-fetched to wonder if the juxtapositions of meteor(ite)/stone and water/'sub-created lake' might have had some place in his thinking about Númenor?

@DDL - I got the photos off Google images, but I didn't see any information of their provenance.