The Eighth Narnia Book - a guest essay by John Fitzgerald

But for them this was only the beginning of the real story. All their life in this world and all their adventures in Narnia had only been the cover and the title page: now at last they were beginning Chapter One of the Great Story which no one on earth has read: which goes on for ever: in which every chapter is better than the one before.

Theologians of the Orthodox Church talk often about the Eighth Day - the great day of Eternity that will dawn at the consummation of this age, once the seven Biblical days of creation are completed. The light of this Eighth Day to come shines on and around us even now, but our spiritual vision seldom seems sharp enough to sense it. Sometimes, however, it bursts through into human consciousness, the Transfiguration of Our Lord on Mount Tabor being the outstanding example, a prefiguration of the Heavenly City and the regenerated, phoenix-like world to be revealed at the end of time.

It's no overstatement to say that C.S. Lewis's Narnia books played an analogous 'Eighth Day' role for me as a boy. Between 1979 and 1982, from the ages of 9 to 12, I lived and breathed the rich, suggestive air of Narnia. It felt like home; my natural element. Before I'd even read a word of Lewis I had stood enchanted in our suburban South Manchester bookshop, captivated by the cover of The Last Battle - the bonfire, the stable, Jill's bow and arrows, Eustace's sword, and the mighty red lion emblazoned on Tirian's shield. One Friday night as well, in January or February 1981, I had a particularly numinous dream, which saw me personally involved in The Lion, The Witch and The Wardrobe, playing my part in the battle to liberate Cair Paravel. Afterwards, Aslan sat us all down in the courtyard and told the most fantastic story, which I was sure I'd be able to remember when I woke up, but which, by breakfast time, was already escaping my memory. It was a bright blue late winter Saturday, and in the afternoon my Dad took me to Old Trafford to watch United play Leeds. We got caught up in a spot of hooliganism, I recall, on the Mancunian Way after the game, but for all the excitement - both the football and the fisticuffs - it's the afterglow of Aslan's story in my young mind that makes that day so memorable.

It's clear to me now, thirty-five years on, that the Narnia stories plugged a huge spiritual hole in my life. Together with Roger Lancelyn Green's mythic retellings (especially his King Arthur book) they filled the sacred space that my ancestors had known since time immemorial but that had been left empty for me by the abolition of the Latin Mass in 1970. And what Lewis did for myself - a Romanised Gael from the North West corner of the Empire - he did for countless boys and girls around the world, with all kinds of backgrounds and all manner of circumstances, and goes on doing today. He is a storyteller and a witness, a prophet and a bard, a princely, and surely heaven-sent counter-presence to the demythologised, dechristianised temper of our times.

The early-1980s, in Britain, felt like an especially intense time to be a pre-adolescent. It was an era of style and colour, but also of riots, recession, and the ever-present threat of nuclear catastrophe. A local newspaper ran a series of articles on Nostradamus, and I was convinced that the end of the world was at hand. I also believed, at that time, that there existed an eighth Narnia book, not a continuation (as in Neil Gaiman's The Problem of Susan) nor fan-fiction, but something on an altogether different level - a secret, hidden text that contained the essence and magic of Narnia, distilling it into a story, like to the one that Aslan had told us in the courtyard, setting off in its readers and hearers a reaction akin to Jewel's in The Last Battle: 'I have come home at last! I belong here. This is the land I have been looking for all my life, though I never knew it till now. The reason why we loved the old Narnia is that it sometimes looked a little like this.'

I was certain that before the final conflagration took place this book would reveal itself and make its holy yet homely presence felt in the world. I hoped and prayed that I might be present when it did, and often I would imagine our school's classrooms and corridors dissolving and giving way to the stone passageways, cavernous halls and lantern-lit chambers of the Grail Castle itself. In a tiny chapel, I was sure, at the top of a spiral staircase, the Grail and the eighth Narnia book stood between the candles on the altar, waiting for the appointed hour - the Kairos, the supreme moment - to roll around at last.

It's interesting, looking back on it all now, to see how much has changed in our world but also how little. We live, after all, in equally uncertain times, and many's the moment when I see, or think I see, the mise en scene of my current working life - the computers, the drinks machines, the carpeted stairs - collapse and reconstitute themselves into the form and fabric of Carbonek Castle. And I'm there -sprinting through the echoing throne room, then up the spiral staircase, starlight glinting through the narrow slits of windows. At the top I find a wooden door, closed but with a soft and radiant light spilling out onto the floor at the bottom. I turn the handle - push, pull and shove - but there's no give and the door stays shut. I bang my head on the wood in frustration, then stiff my mind and pray: 'Oh God, if ever I've done anything good in my life, give me a glimpse please of that which I've always seeked.' The door swings open and next thing I know I'm kneeling down, gazing into the heart of the Grail's golden blaze as it fills the room and bathes my soul in its healing, transfiguring light.

There are six tall candles on the altar, three to the Grail's left and three to the right. I see flowers as well, and a flicker and swish in the air like the beat of angels wings. An ancient, bearded priest in green - Joseph of Arimathea himself, perhaps - sits on the right, while three men kneel with heads bowed low right in front of the altar. I can't see their faces, but I know who they are - Galahad, Percival and Bors - the three Grail knights. Standing on the left is a female figure robed in red with a face like the sun, holding an open book in her hands, silver in colour with a mighty red lion emblazoned on the front. She reads aloud - sings rather - in a language I don't know but for some reason am able to understand as well as if it's my own. Her chant - high, strange and wild - reverberates around the chapel and I recognise and remember what it is she's singing - the long lost story, no less - the story Aslan told us in the courtyard, the selfsame tale, I realise now, that Lucy read in the Magician's Book in The Voyage of the Dawn Treader, the one about the cup and the sword and the tree and the green hill, the one she rates as the loveliest she's ever read and that Aslan promises to  tell her again and again for ever and ever.

Over-excited and carried away, I scramble up and dash into the room, arms outstretched. But a puff of wind laced with flame blinds and singes my eyes, and I'm ushered out of the room by a host of invisible hands and bundled down the stairs. Darkness engulfs me and when I come to I'm somewhere else altogether. A fresh, briny, morning smell, probes and pushes my mind awake. I'm met by lapping waves in front, white cliffs behind, and a canopy of pale blue, seagull-flecked sky high above. There's sand beneath me, rough and bristly to the touch. I stumble to my feet. The sun, rising behind the cliffs looks huge, five or six times its normal size. That's when the other smell hits me - familiar and reassuring - the smell of breakfast - fresh coffee and roasting fish. Something catches my eye, small and bright, towards the sea and to my right. It's a lamb, tending a cooking fire  and a burnished bronze coffee bowl. 'Come and have breakfast,' he says in his milky voice.

'This is all a dream,' I say to myself. 'Like the one I had about the fight at Cair Paravel when I was a kid.' I look behind me again, fully expecting to see the big sun vanished and the fixtures and fittings of the office restored to their habitual reality. But no, it's still there, even bigger than before if anything. I can look straight at it too, without even needing to shield my eyes.

I crouch down, pick up a fistful of sand - spiky and spongy at the same time - and watch it trickle down and stick to my fingers. It's unmistakably real. And there's a brightness in the air and on the ground and a joy in my heart which assures me that this is no dream. Then I start to understand. The dream, in fact, is over. This is the morning. The dawn. The Eighth Day has begun.

I stand up, turn and face the sea, and walk towards the Lamb. 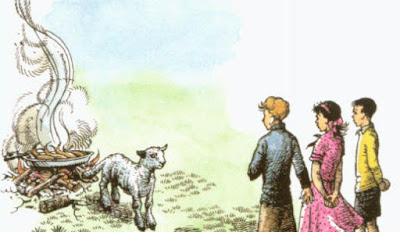 This is astonishing, and powerful.

I don't have anything left to say. This is the kind of thing that I loved in, say, John C. Wright's "Parliament of Beasts and Birds" or "Last of All Suns".

Simply put, everyone loves to sit down with a book to read about epic deeds and subjects more breathtaking than anything found in daily life... but there's no theme greater in scope, or more awe-inspiring, than that of God and the ultimate salvation of the world.