I do not have a high opinion of publishers - and one of their worst attributes is to use cover art on fiction which is wildly inaccurate, and has either nothing to do with the text, or includes outright falsehoods - people, things and events that never happen in the story.

One of the most notorious was that Ballantine paperback cover of The Hobbit  - which deployed a talented artist, but one who had never read the book and was given such a ludicrously short time to produce the artwork that it was a miracle she completed the picture: there was zero possibility of painting the cover and also reading the book, as is very obvious: 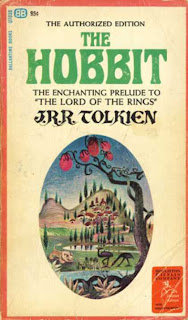 Aside from the picture having nothing to do with anything in The Hobbit it is the pair of emus quietly grazing by the lake and reflected in its placid waters that really get me!

But what gross, savage disrespect for a publisher to saddle an author with such irrelevant and misleading cover art.

(It should be pointed-out that Tolkien's British publishers were of a completely different mindset - and went to enormous lengths in trying to accommodate Tolkien's exacting requests.)

Another example is the back cover of my copy of the the first edition of Harry Potter and the Philosopher's Stone: 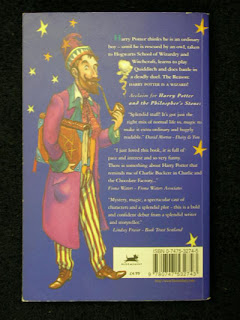 Who the heck is that supposed to be?

Don't say Dumbledore, who is described as: "tall, thin, and very old, judging by the silver of his hair and beard, which were both long enough to tuck into his belt. He was wearing long robes, a purple cloak that swept the ground, and high-heeled, buckled boots. His blue eyes were light, bright and sparkling behind half-moon spectacles and his nose was very long and crooked, as though it had been broken at least twice."

No, the fact is that the Philosopher's Stone illustration, which apparently survived for about a score of impressions of the first edition, is of some person who certainly does not appear anywhere in the novel - it is inaccurate simply because there has been no attempt whatsoever to be accurate.

Usually, the worst excesses are practiced on novice authors; suggesting bullying as a motivation.

But another example is Josh Kirby's illustrations for Terry Pratchett's discworld novels (look them up for yourself, if you dare), which are just plain grotesque as well as inaccurate to the test - but which (since they appeared long after he became a huge seller) I presume were approved by the author; for hard-to-fathom reasons.

But let's end with a counter-example from the Armada Lion's edition of Lloyd Alexander's Book of Three commencing the Prydain chronicles: 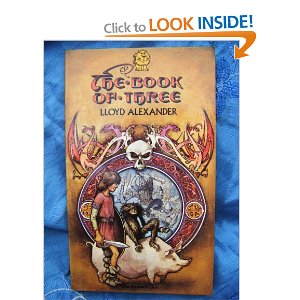 Which is a delightful and accurate illustration by the young and as-yet-unknown Brian Froud; who not long afterwards went-on to co-publish (with Alan Lee) the superb and influential Fairies, and became one of the most famous ever fantasy illustrators.

Well, he didn't like it (including the earlier version with a lion). but perhaps the expression is excessive. I'd say the cover design, including the lettering, suggests a story of journeying in a remote and quaint realm of adventure -- which isn't too far off, after all. The artist obviously isn't trying for a realistic depiction of a scene form the story, which might suggest confidence in story and in reader as someone able to respond to the experience offered by the story.

I admit that I can't look at this image impartially. It is the design that drew my attention many years ago; when I opened this book and began to read, an imaginative epoch began. However, even making allowance for the affection I feel, I think this design is preferable to, say, the flatfooted realism of Darrell Sweet.

How difficult is it for the publisher to tell the designer what to draw?

Or, of you are designer, to find a page with a description then draw what is described?

My friend Alasdair Gray (who doubles as a extremely talented artist and illustrator) was literally in tears over what Penguin came-up-with for his novel The Fall of Kelvin Walker - nothing remotely like the scene depicted happens in book, indeed it gives an actively false impression of the protagonist. But Penguin would neither back-down nor admit their error.

I know -- if *I* had written The Hobbit and had seen that cover design, likely I'd have been shocked and dismayed. And yet, for some of us that cover design suggests an extraordinarily joyous reading experience -- and that is what we get, without having to struggle past the images planted in our minds by the work of artists who are, in obvious ways, much closer to depicting scenes from Tolkien.

There's actually an explanation for that wizard on the Harry Potter back cover.

@Anaon - Thanks for that. It proves my point exactly: "when I was commissioned by Barry Cunningham to produce the cover art for a debut middle grade novel by an unknown author called J. K. Rowling — and yes, I did read it — I was asked to provide “a wizard to decorate the back cover”"

- "a wizard"... what crass, arrogance on the part of the publisher. And despite this, at the end of the day, they made more money off the books than the author.

Yet even so, it was a further act of extreme arrogance for the illustrator (having apparently read the novel) deliberately *not* to base his 'a wizard' on a character from the novel, but instead on his father.

Great post idea. When I was a kid, I used often to notice that fantasy covers were almost always inaccurate, to the point where sometimes I couldn't figure out exactly who the characters were supposed to represent! When I noticed these inaccuracies, in my youthful innocence, I generally imagined the fault was *mine* for failing to read the book properly...

Concerning Hobbit art, have you ever seen these? Pretty cool interpretation, in my view, even if not strictly what Tolkien was going for - there's something about the Eastern European style that is alien and wonderful at the same time.

I never noticed the pentagram on the book on the back cover before, although I owned that edition. Perhaps that is partially where the regrettable "Harry Potter endorses Satanism" idea sprang from.

(Yes, I know the pentagram was not originally a satanist or pagan symbol... but most people don't.)

@SJ - Ive seen some of these picture in my annotated Hobbit - but not all of them. Some of them are quite charming, but I find Bilbo's black-hairy legs to be quite disturbing...

@C I suspect this cover was not used n the US edition, (called HP and the 'Sorcerer's' Stone!), so I don't suppose the pentangle depicted here had any role in the weird and ignorant rejection of HP by some protestant groups.

I first came across the pentangle/ pentacle/ pentagram in an essay by Robert Graves (who was a neo-pagan), but also in Sir Gawain and the Green Knight written c1380, where it is certainly a Christian symbol.

I rather like this image of "The Hobbit in One Picture".

@JRRTR - It's certainly a superb design, and very well executed - although the Chinese style is not much to my taste. If it could have been redrawn by Pauline Baynes in her neo-medieval style it would be perfection!

I think the most abused fantasy book, as far a cover art is concerned, is Ursula Le Guin's Earthsea series.