(Too much?) Hobbit talk


I am always surprised at how few Tolkien fans have read the early drafts of Lord of the Rings published as volumes 6-9 of the History of Middle Earth edited by Christopher Tolkien.

C.S Lewis complained that the first drafts of had too much 'Hobbit talk' - and below is one of the more extreme examples, which ended-up on the cutting room floor.

Note: 'Bingo' became Frodo; 'Odo' became Pippin; but 'Frodo' was replaced by Sam - who has a very different character and background.


Odo was not thinking about hobbit-history. He merely wanted to know where to look for the farm. If Farmer Maggot had lived in a hole, there would have been rising ground somewhere near; but the land ahead looked perfectly flat.

‘He lives in a house,’ answered Frodo. ‘There are very few holes in these parts. They say houses were invented here. Of course the Brandbybucks have that great burrow of theirs at Bucklebury in the high bank across the River; but most of their people live in houses. There are lots of those new-fashioned brick houses – not too bad, I suppose, in their way; though they look very naked, if you know what I mean: no decent turf-covering, all bare and bony.'

‘Fancy climbing upstairs to bed!’ said Odo. ‘That seems to me most inconvenient. Hobbits aren’t birds.’

‘I don’t know,’ said Bingo. ‘It isn’t as bad as it sounds; though personally I never like looking out of upstairs windows, it makes me a bit giddy. There are some houses that have three stages, bedrooms above bedroom. I slept in one once long ago on a holiday; the wind kept me awake all night.’

‘What a nuisance, if you want a handkerchief or something when you are downstairs, and find it is upstairs,” said Odo.

‘You could keep handkerchiefs downstairs, if you wished,’ said Frodo.

‘You could, but I don’t believe anybody does.’

‘That is not the houses’ fault,’ said Bingo; ‘it is just the silliness of the hobbits that live in them. . . .  If ever I live in a house, I shall keep everything I want downstairs, and only go up when I don’t want anything; or perhaps I shall have a cold supper upstairs in the dark on a starry night.’

‘And have to carry plates and things downstairs, if you don’t fall all the way down,’ laughed Odo.

‘No!’ said Bingo. ‘I shall have wooden plates and bowls, and throw them out of the window. There will be thick grass all round my house.’

‘But you would still have to carry your supper upstairs,’ said Odo.

‘O well then, perhaps I should not have supper upstairs,’ said Bingo. ‘It was only just an idea. I don’t suppose I shall ever live in a house. As far as I can see, I am going to be just a wandering beggar.’

This very hobbit-like conversation went on for some time.

Tolkien later wrote that he was 'personally immensely amused by hobbits as such, and can contemplate them eating and making their rather fatuous jokes indefinitely...'

I find I agree, on the whole; and have always found the Shire parts of LotR among my favourite parts of the book.

For those who share this taste, there is a great deal to enjoy in the first and last volumes of Christopher Tolkien's books on the History of the Lord of the Rings.

What is the point of the tale of Turin Turambar?

I have never enjoyed reading Tolkien's Silmarillion stories about Turin Turambar - because they are so miserable and tragic as to seem almost sadistic in the sufferings they describe.

Indeed, I found it hard to understand why Tolkien had written the Tale of Turin, and especially why he kept returning and returning to it - in different versions and styles; such that it seemed that Turin had some special meaning which I was missing.

Yet - on the face of it - Turin is a pretty appalling hero, whose courage is flawed by reckless impulsivity and bad temper, who is prone to savage and violent despair - and whose struggles against Morgoth and the dragon seem futile.

But in the earliest intention, I think we can understand Tolkien's fascination for Turin.

Later versions of The Silmarillion leave out the key explanatory event, which makes sense of Turin's fruitless struggles.

This can be seen in the earliest published version, from The Book of Lost Tales Volume 2, page 115:

After Turin has committed suicide by asking his own sword to slay him (a request to which the sword verbally agrees) - we discover this:

Turambar indeed had followed [his sister] Nienori along the black pathways to the doors of [the death goddess], but [she] would not open to them, neither would [Mandos - the Valar of death].

Yet now the prayers of [their parents] came even to Manwe [the highest Valar], and the Gods had mercy on their unhappy fate, so that those twain Turin and Nienori entered into ... the bath of flame... and so were all their sorrows and stains washed away, and they dwelt as shining Valar among the blessed ones, and now the love of that brother and sister is very fair;

but Turambar indeed shall stand beside Fionwe in the [Last Battle]; and [Morgoth] and his [dragons] shall curse [Turin's sword].

The meaning now becomes very obvious, and the underlying reason for Tolkien's decades long fascination with this story.

Turin Turambar is Man, Everyman - in all his weakness and his strength; the greater his strength, the more evil he accomplishes in the end.

Crippled by original sin (his impulsive violence and bad temper and despair), whose undoubted valour and heroism all lead to evil.

His will to Good being always perverted to wickedness; the stronger the will, the worse the consequences.

Man who is puny, easily manipulated and apparently helpless in the face of the relentless evil will of the god, the fallen chief angel of Morgoth/ Satan and his demons (the dragons).

Man who, despite the ultimate human achievement of slaying a dragon, is finally utterly broken in spirit by accumulated sorrow from the torturing fate laid upon him by these vastly superior forces of malice so that he commits the final mortal sin of seeking his own death...

Where is any possible hope in this?

It is this same Everyman who is resurrected via the purification of the purgatorial fire, to become a Son of God, higher even than The Valar' - as symbolized by the fact that it is Turin Turambar who slays Satan and inaugurates the re-made world (the New Jerusalem, Heaven in Earth)

- as described in the second prophecy of Mandos in the Quenta Silmarillion:

Man redeemed who thereby accomplishes a task impossible to any of the gods, or all of the gods.

Presumably Tolkien recognized the too-obvious Christian symbolism behind the early versions of the Tale of Turin Turambar, and deleted the denoument.

Yet that was the origin of the Tale, and that is what makes sense of it; and indeed of the Silmarillion as a whole.

Tolkien knew that despair was a sin and hope a Christian duty; yet the reason for hope got left-out of the published Silmarillion.

This whole sequence of events in the evolution of the Silmarillion legends can be taken as evidence that Christianity is the only ground for hope in this world as we know it.

And that insofar as Tolkien eliminated Christianity from his Legendarium, thus far he necessarily eliminated hope.

Among the works of JRR Tolkien that were unpublished during his lifetime, there is a wide range.

At the summit are things like The Marring of Men

Which is essential reading for any Tolkienian.

And at the base are things like Mr Bliss; which is little more than a diversion - you are missing nothing if you have not read it.

Somewhere in the middle are things like The Father Christmas Letters and Roverandom ; these are well worth reading (and looking at the pictures), your time will be amply rewarded - but they are non-essential.

I find Roverandom somewhat better than the FCLs. The plot does not seem worth summarizing, and it would be better to leave the various twists as a surprise; but there is a very pleasing atmosphere and style about the whole thing; a fluidity and a fluency, and a warmth of wit, that I find utterly charming.

Perhaps I most enjoy the vivid sense of Tolkien's personality, and in particular that aspect which was a good and loving Father.

The book has a few illustrations, all of which are worth a second glance, one of which is a fine drawing of a mountain, and another of which is a detailed and large scale waterclour of the Mer-King's palace - this is certainly one of the very best artworks Tolkien ever did; a really lovely thing. 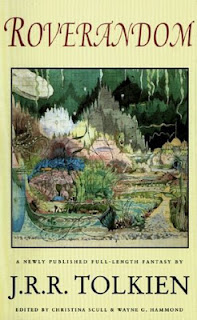 Posted by Bruce Charlton at 10:59 No comments: